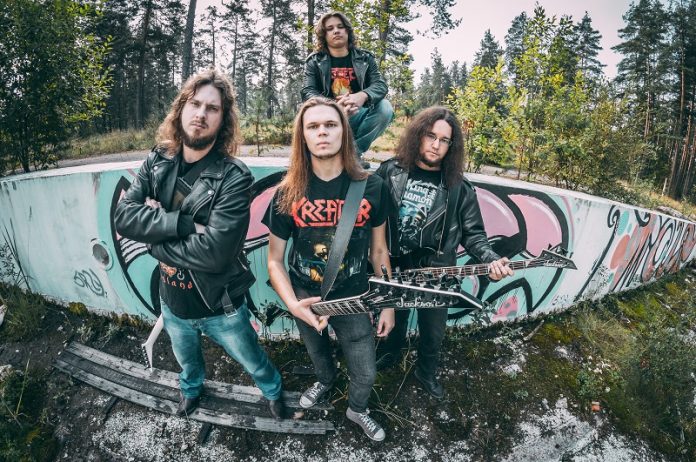 They started as a covers band, now they are here in their own right

Saintorment was born in Daugavpils in spring of 2013 “as a child of love towards old school metal racket.” The first live shows were played during the autumn of 2013.
Starting as a cover band playing tunes of Metallica, Kreator, Pantera, Exodus, the band soon recorded some demo tracks of their own material.

Romans (guitars and leader of the band) and Ed (drums) were the first members who started to play together.

Without even a name for their band, they played then only in studio and were developing  skills. Then they got in touch with Dan (bass), who gave a name to the new-formed collective, and continued to play together.
The band was constantly searching for a lead singer, but didn’t manage to found one, so Romans decided to take the microphone. Around the middle of 2014 they had already played a lot of gigs in Latvia and also in Lithuania. In the end of 2014, the band invited Max (an experienced musician, who played in such bands as Balaguri, Begotten, Asthma) as a second Rhythm/Lead guitar player.

During the summer of 2015 Romans recorded Saintorment’s first album entitled “Well of Sins”, which was released by the end of the year in December.

Here it is in full.