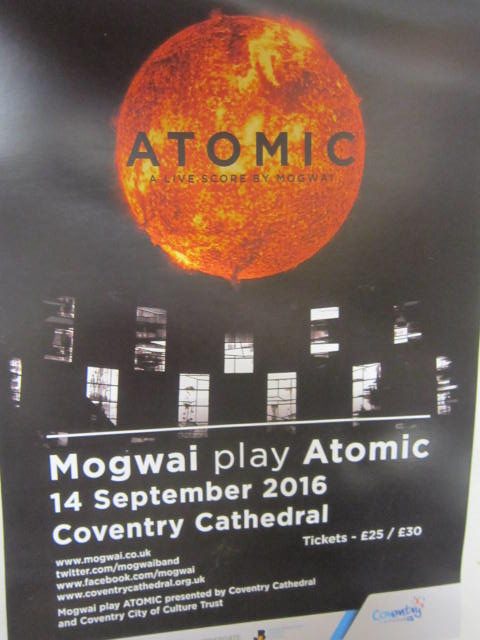 I had never seen Mogwai and had foregone a number of occasions to see them, in my home city of Birmingham over the years

So when I heard about an event in the wonderful setting of Coventry Cathedral, I thought it was an opportunity too good to miss.

The guys have been around since 1995 and are renowned for composing lengthy guitar-based instrumental pieces that feature melodic bass guitar lines and heavy use of distortion and effects.

The band supplied the music for Mark Cousin’s documentary Atomic, Living in Dread and Promise.

The soundtrack was reworked and released as Atomic on 1 April 2016 and the band are undertaking an extensive live tour of Europe and Japan performing the soundtrack against a backdrop of the screening of the film.

To warm up for the show there was a screening of Mark Cousins ‘I Am Belfast’ in The Ruins of Coventry Cathedral. This was accompanied by some live music from part melodic and uplifting; part pure noise of Those Amongst Us Are Wolves.

Sadly, I only caught the latter end of this.

The bells ring out 8 pm as we enter the Cathedral and take our seats, I was impressed that so many had come and I would put a rough guess at around three thousand in attendance.

An hour later and Dean of Coventry, The Very Reverend John Witcombe stood up to welcome us and explained that the show was organised as part of Coventry’s bid to become the City of Culture for 2021.  He was delighted that the show was able to be staged there as the Cathedral is a centre of reconciliation. The previous Cathedral was devastated by bombs dropped by the Luftwaffe during nine hours on the 14 November 1940. He then introduced us to the Director of “Atomic” Mark Cousins, who was born in Coventry and also baptised in the font in this very Cathedral. The lights dimmed, the film commenced and the band walked on stage and the show commenced.

70 years ago, the bombing of Hiroshima showed the appalling destructive power of the atomic bomb. This documentary looks at death in the atomic age, but life too. Using archive film, Atomic shows us a kaleidoscope of our nuclear times: protest marches, Cold War saber rattling, Chernobyl and Fukishima, but also the sublime beauty of the atomic world, and how X Rays and MRI scans have improved human lives. The nuclear age has been a nightmare, but dreamlike too.

I thought the film gave a pretty good balance in showing the positive and negative arguments for the use of nuclear elements. The music enhanced the visuals and at times the noise was quite unsettling.

It was thought provoking to see the inadequate historical view as to how we would cope with a Nuclear attack and one scene of a young child shivering uncontrollably, possibly after the attacks in Japan, has stayed with me since.

The bombings in Nagasaki and Hiroshima, the Three Mile Island accident, the Chernobyl and Fukishima disasters, Faslane, Greenham Common Women’s Peace Group, peace marches, the Space race and the Cuban Missile crisis were all covered.

Overall it was a really thought provoking film, enhanced with a wonderful live soundtrack. The subject still holding relevance today as the arguments regarding Hinkley Point in Somerset are prominent in today’s news.

I really enjoyed this gig or maybe event would better describe it. I am still reflecting back on it and am sure it will stay with me for some time to come.

The Dean of Coventry said this type of event would be monthly if Coventry were successful in obtaining the City of Culture mantle for 2021.

I for one, very much hope they do.