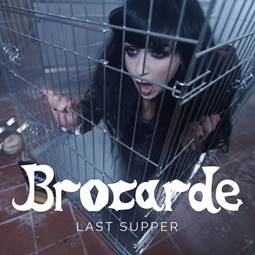 Brocarde is an incomparable British songstress with a singular vision. She first tasted success as a jewellery designer when her brand of unusual, alternative accessories exploded into the mainstream. But then she became disillusioned with celebrity culture and, after destroying her famous creation, set off to Los Angeles to write and record her debut album.

‘Last Supper’, the incendiary first single from the album, set for release on Good Friday, April 19th, begs the listener to question their relationship with celebrity culture, social media and loved ones and asks the all-important question “What will you consume at your last supper?”

The video, written and directed by Brocarde, takes the viewer on an uncensored journey, tackling controversial issues such as cannibalism, religion and abuse of power, leaving them open for interpretation and discussion. It is a twisted fairytale with a haunting darkness that’s usually only present in horror movies.

Brocarde approaches music in a different way. She is genre-less. She uses instrumentation to match sounds to emotions; her vulnerable, fragile side is captured by an orchestra of delicately plucked strings, while her angst and frustration are reflected in the heavy metal undertones. Brocarde is cinematic, captivating and an artistic storyteller whose full throttle sass makes you stand up and take note.

Brocarde began writing plays, poems and songs as a very young girl, performing them wherever possible even if uninvited. Her school years weren’t her favorite years; her creative energy and unruly tenacity made her stand out in a way that other people didn’t always warm to, and when she was sitting alone in the corner of the playground she used to escape into the magical world of the poems and plays she was writing.

Even as a teenager, her words were dark, emotional, hard hitting and gritty, and a stark contrast to the bubblegum, mainstream ‘…Baby One More Time’ road she kept being led down. Brocarde simultaneously began making her own gowns and jewellery, adorning herself with rows and rows of beads, handmade, like her stage clothes, in her bedroom.

It wasn’t long before her jewellery began attracting attention; girls would offer to buy the bracelets off her wrists and she would return home each evening with a handbag stuffed full of custom orders. Excited by the independence this gave her, she flung her heart

into making and fulfilling orders and officially launched the company. It wasn’t long before word spread and her designs were spotted on the likes of Lady Gaga and Katy Perry; riding the crest of the wave, she spent every waking hour designing and making exclusive jewellery in the hope that the company would give her a platform to launch her music.

But the bigger the company grew, the more its ethos escaped her. Initially it was about selling unusual Alternative accessories, which at the time were unique and celebrated individualism, but as its celebrity following grew, her brand lost its heart. Having become increasingly frustrated with celebrity culture – and popular culture in general – her only option was to destroy the monster she had created.

She closed the jewellery company and never looked back. She went to LA to finish the album she had started and discarded every song that she had previously written. Brocarde made a promise to herself that she would never compromise her vision, and to never be filtered for commercial success.

‘Last Supper’, the first hard hitting song she wrote when she got to Los Angeles, is a song which won’t get out of your head once it has wormed its way in, let alone a perfect introduction to Brocarde’s inspirational, arresting, matchless musical concoction.