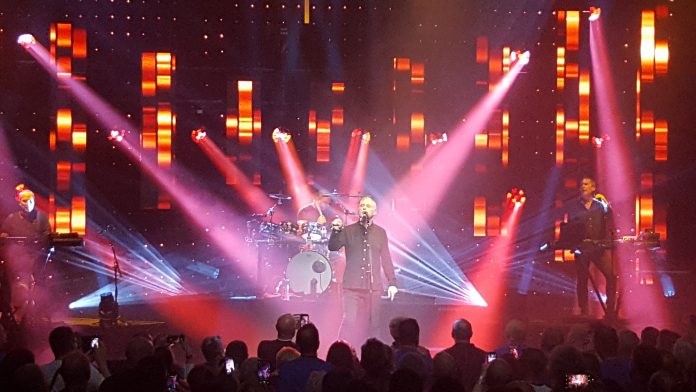 If, 40 years ago, you’d told either Andy McCluskey or I that I’d be sitting in Symphony Hall watching OMD play to a sold out audience then I’m fairly sure neither of us would have believed you.

Firstly I was an out and out rock fan, whilst he, certainly in the early days, thought of themselves as experimental German influenced electronic band and most certainly not a “pop” band.

Despite my rock leanings I bought the Enola Gay single because it was, as each TOTP appearance proved, incredibly catchy.  That was my fleeting moment with OMD until many years later when I finally accepted what most others knew, namely that they wrote some damn fine tunes.

With album and single sales from their heyday running into the millions, it would be easy to dismiss OMD as a heritage band and yet Isotope the second song into the set and written in 2017, shows that neither Andy or Paul Humphreys his musical partner over the years have lost their knack at writing a good song.

A set described as ‘old ones, new ones, weird ones and dancey ones’ is apt – one song in and Andy announces that “you will be mostly dancing” and the sell-out audience is happy to oblige. His dancing style is by his own admission ‘dad dancing’ as he windmills across the stage throwing shapes that wouldn’t be out of place in an aerobics studio. The only person who comes close to matching his dad dancing is Danny Bowes from Thunder. It would be a close contest to see who is worse. Or is that better?

The hits come thick and fast in Messages, Tesla Girls and the (Forever) Live and Die sung by Paul, which has to be the most underrated boy band single of all time. Souvenir leads into the double tribute to Joan of Arc and we head to the ‘weird’ in the set. Almost was the B side to Messages and as Andy proudly proclaims when Vince Clarke worked out how to play the synth line he then left to help form Depeche Mode.

As you would expect from Symphony Hall the sound is immaculate with a stunning visual backdrop enhancing the whole show. Audience participation is demanded and happily given as the hand claps during Locomotion reminded me of Queen’s Live Aid performance of Radio Ga Ga.

Enola Gay ends the superb main set, a short break and the encore of three songs ends with Electricity which is where the OMD story started all those many years ago. The obvious warmth and friendship between Andy and Paul suggests that OMD are far from finished and will hopefully be back in Birmingham again. If you missed it this time; don’t miss it next time!