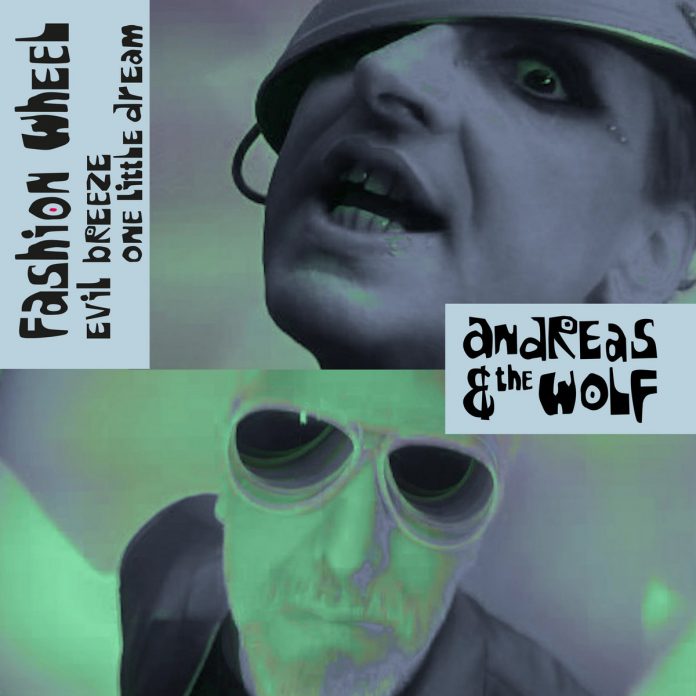 Andreas & The Wolf are musicians, disc jockeys and label owners (Perfect Pop Co-Op). Their cult radio show is now in its second year, but they’ve been in bands much longer such as The Scratch, The Dodo, The Bleeed, Reverse Family and also The Tuesday Club. They released their debut three track EP “Fashion Wheel” in April, a further three tack EP” All I Want Is You” and have a nine-track album “Fountain Of Truth” pencilled in for an October release.

A brief drum shuffle followed by a laid back leisurely guitar opens up `All I Want Is You` before some sweeping synth swatches allows the dreamy vocals to relate a tale of the pursuit of their idealised female almost to the point of obsession. A wonderful earworm of a song.

`Gods Gift` is bass lead with some fine keyboard swatches with the lyrics almost spat out at times in a sort of London centric accented twang which really added to the ambiance of the track. There was a cleaver poetic rhyming of the lyrical sentences at times and some fine harmonies. A really interesting track which seemed as if it could have been the lovechild of Public Image Limited and Blur.

`Play Up Charlie` closes out this trio of songs and it seems to enjoy a variety of musical instruments from synth inflections to melodica whilst there`s a consistent quite hypnotic bass line throughout. The narration is seemingly in awe of the god like genius of Charlie shared in an almost spoken word style. Wonderfully offbeat.

This was a cracking introduction to this outfit hailing from the cathedral city of St Albans and an appetising entrée for the album to follow. I look forward to experiencing the main course.