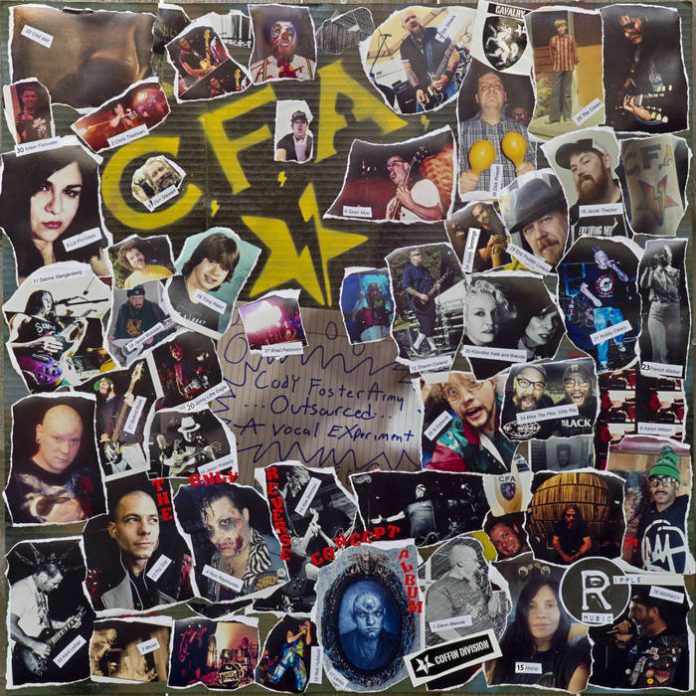 Comprising of 36-tracks, each consisting of behemoth-sized brashness and foul-mouthed, raw punk rock attitude, this unique compilation throws back to the days when telling the man where to go was the only way to get things done. Powered by schizoid front man Cody Foster who recruited an army of talented vocalists to sacrifice both their vocals chords and sanity, over thirty+ tracks we’re treated to individually written songs, performed to a familiar instrumental track… with each singer throwing down their furious interpretation however they see/hear fit.

The idea was spawned from a practice regularly indulged in at your average Cody Foster Army live show, where the band pulls punters up to improvise vocals to a one minute frenzied piece of music. Like Xeroxing a Xerox, each track trades in like-for-like blows of punk rock fury through vocal renditions by Liz Porcayo (Skies Below), Tony Reed (Mos Generator), Tim Silvers (Antihero) and many more. MakingCFA Outsourced: A Vocal Experiment a project conceived through noise and community participation. A testimonial perhaps to the true spirit of rock-n-roll and reminder of just how carefree, tumultuous, and fun punk rock can truly be.