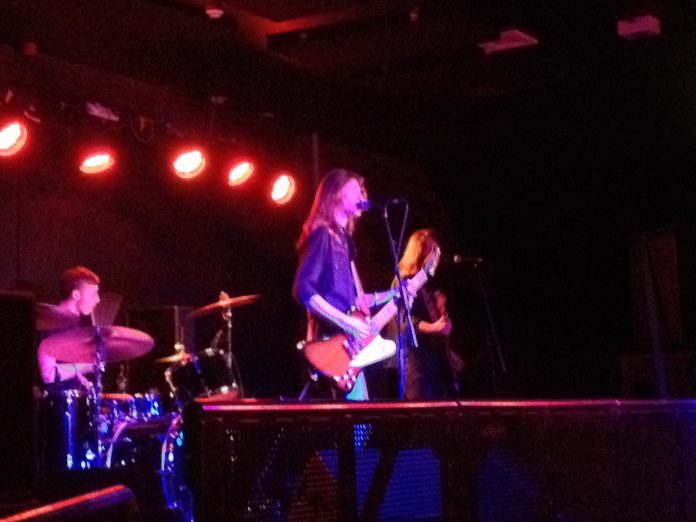 That Theia are superb tonight should come as no surprise to anyone. You can put them on at any gig and they would turn up, play excellent songs full of swagger and confidence and do so in the manner of a band destined for much bigger things. “Ride On” thumps, while “We’re Alive” is its usual maelstrom. They add a new one to the set tonight in the form of “Home Brew” which brings a dash of Southern Rock to proceedings, and “Whoop De Fuckin’ Do” closes things as ever with its boogie (and with singer Kyle atop the speaker stack if you don’t mind). Straight up rock n roll doesn’t get any better than this Midlands three piece and that’s a fact.

They are followed by another trio Indy_Fire. The West Midlander’s come with a little bit of a pedigree. They’ve just recorded their new single at Dave Anderson’s (Hawkwind) studio in Wales. Soundgarden play before they come on and to be honest that’s a rather neat segue into their first song, which has a similar feel to the “Badmotorfinger” era, at other times there’s a more classic rock angle as the choruses and riffs soar. Jim on vocals and guitar is impressive, the rhythm section of Rob on drums and Phil on bass keep things rumbling nicely and when the band lock into a groove it’s really something. They dip into a slow one, but it’s one of those ballads that has to work hard to restrain itself, before eventually giving up and cutting loose. There’s enough here to suggest that Indy_Fire could be hot in the near future.

Despite his tender years Aaron Keylock has been marked out as one to watch for years. Still a teenager, he’s just signed a deal with Joe Bonamassa’s record label, and proved on his tour with Blackberry Smoke last autumn just how good he was. It’s hard to remember that this is his first headline tour of the UK. Tonight, as he opens with “Medicine Man” the crowd is a little thinner than it will eventually be (a cold Mother’s Day was never going to be conducive to huge numbers) but that can’t hide that there’s something very special happening here. And that won’t, in years to come, stop people claiming “I Was There.”

With his long, flowing locks and sporting flares Keylock looks to have been transported in from another decade and his early, faithful cover of Johnny Winter only goes to prove that this is not the average guitarist getting his Teenage Kicks.

A set full of twists and turns, Keylock plays “Just One Question,”  a wonderful song inspired by Peter Green, his playing full of emotion, while “Lovin’ And Lies” which came before, is good, fun rock n roll.

And that, in a nutshell, is the skill of this three piece – and make no mistake here, this is very much a very, very good band, at times the guitar gently weeps, and at others you’d swear you were listening to something like The Georgia Satellites. Notably on the new track they play “Carly” which has a glorious bar band vibe. And just when you think you have things pegged, another recently written affair comes at you like the Allman Brothers.

As you’d expect Keylock permits himself a small jam before the close and when the band decides to play, then it’s a thing of beauty. They finish with the 12 Bar freak out of “Give Me A Chance To Explain” which is at once classic sounding blues, and you wouldn’t want it any other way.

Watching Aaron Keylock tonight is to watch an artist taking his first steps on what will be an exciting journey. There’s no doubt either that he’ll get wherever he wants to go. To borrow a song title from way back when. The kids are doing better than alright. They’re just fine, thanks.