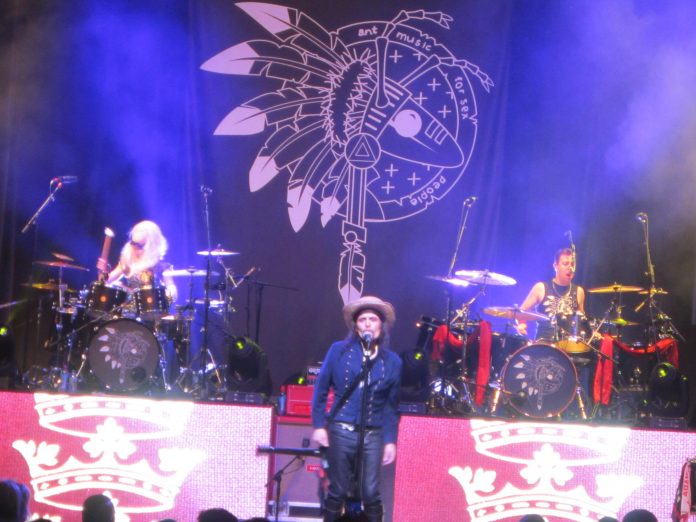 As the theme tune for the 1960`s British mystery spy thriller television series `The Saint` blasts through the pa, the band assemble on stage. Tonight, we are two thirds the way through the UK trek of Adam Ant`s “Friend Or Foe and other favourites” tour, as this event reaches the wonderful Symphony Hall in Birmingham. There are very few empty seats in this over two thousand capacity concert venue, which is a real mark of this artist`s longevity.

There`s no real fanfare as Adam and the band share 1982`s “Friend Or Foe” album in it`s entirety. Although this isn`t a favourite of mine, Adam’s first release as a solo artist scored three hit singles. The first of them being the title and opening track with its tribal beat and compelling chorus of “I want those who get to know me, to become admirers or my enemies” Over the next forty minutes we get to hear an album that I haven’t listened to for some time with the highlights for me being `Desperate But Not Serious`, `Goody Two Shoes`, `Made Of Money`, `Try This For Sighs` and instrumental `Man Called Marco` complete with whistling.

There`s no let up for this sexagenarian as for the remainder of this two-hour set, we enjoy nigh on hit after hit. The trademark big Burundi drum sound kicks us off on `Dog Eat Dog` and `Kick! ` before the raw `Vive Le Rock` and `AntMusic` which sends the faithful into raptures.

The show closes out with a variety of tracks such as the almost psychedelic `Ants Invasion`, `Prince Charming`, `Lady / Fall In`. `Kings Of The Wild Frontier` and fan favourite `Stand And Deliver`

It`s not long before the troupe are lauded back on stage for a three-song encore which includes `Press Darlings` and `Physical (You`re So) ` amongst them, then Adam gives a wave and that`s it. What I do admire about Adam is that he doesn`t just rest on his laurels but he`s content to tour something different each time. Last time it was the Anthems show, before that the “Dirk Wears White Sox` album and before that the Blueblack Hussar in Marrying the Gunner’s Daughter. What does help is that he has surrounded himself with an accomplished array of musicians with the superb guitarists A P Leach and Will Crewsdon, bass player Joe Holweger and gifted drummers Jola and Andy Woodard. Once again tonight was a night that Adam Ant delivered and I can`t wait to see what he will offer next time around.