The material here was writing during and right after the “Satan macht frei” (2004) album, and as such perfectly fits in the evolution of Blackdeath towards apocalypse.

Upon first hearing, you will find the material has the primitive aggression like “Bottomless armageddon” and the previous albums, but upon closer listening you’ll find the riffs and song writing are slowly morphing into their later sound as heard on “Vortex” and “Katharsis” albums.
As with all Blackdeath material, “Totentanz” is in a way sounding strangely removed from a natural, organic sound. Created in solitary Russia, Blackdeath’s own apocalyptic black metal sounds like nothing you have heard before. These songs are the last Blackdeath songs to feature a drum computer and combined with the atypical melodies and sound with hysterical and possessed vocals give the whole an unhuman and unrelenting aura that is simply uncanny and truly evil. Their unique style is present on all of their recordings, and the fact they stayed true to their style is the main reason Blackdeath is the only Russian black metal with a highly respected status not only in Russia but especially far outside.
Originally, part one (“Totentanz”) was a split CD/LP with Mortifera – as a kind of continuation of the first split between Celestia and Black Draugwath, and has been unavailable for years.
The second part (“Totentanz II”) was a split CD/LP with Leviathan (USA), who invited Blackdeath. For a lot of Blackdeath devotees, this was the introduction to the band and remains a favourite to many. This split has been out of print and only available through the bootleg and pirate pressing circuit.
This release features both “Totentanz” parts remastered to sit together better, and with slightly changed song order.
Comes as six-panel digipack with a booklet. Lyrics and the history behind the release are included in the 8 page booklet.
After the previous full tour with Inquisition and Archgoat in 2015, Blackdeath will tour North/East Europe again in January and February 2016. 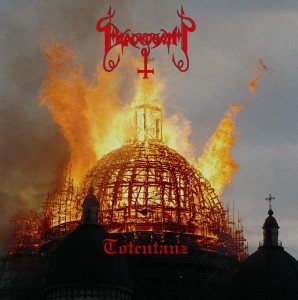