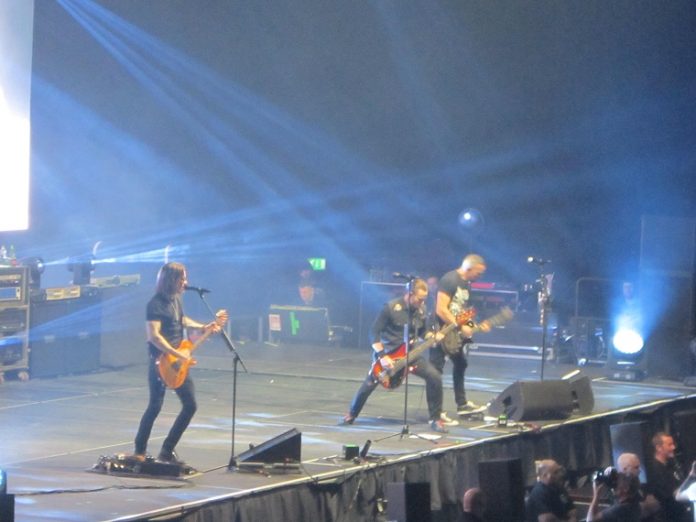 I always feel the opening act on a stadium bill must be a really thankless task but for London melodic metalcore five piece The Raven Age it`s an unexpected opportunity. They have come in at the last minute to replace US hard rockers Sevendust whose drummer Morgan Rose was admitted to hospital and has since undergone surgery. The fellas have a new album out called “Conspiracy” and understandably all but one of tonight`s tracks in this short set is culled from said release. It`s been awhile since I last saw the band, over four years and there have been a few changes with singer Michael Burrough leaving last year, as did founder member Dan Wright. The vocalist they chose to freshen things up with was Matt James, ex of The Wild Lies and I have to say it was an astute choice. The anthemic thumping `Betrayal Of The Mind` kicks us off, followed quickly with the thumping `Forgotten World` and the stunning `The Day The World Stood Still` which starts quietly but builds into a real heavy vibe. `Fleur De Lis` and `The Face That Launched A Thousand Ships` with the audience lighting up the venue with their phones keeps the pace moving before `Seventh Heaven` and `Angel In Disgrace` close out this evening`s brief but cracking performance.

I really enjoyed these guys and hope it`s not too long before they are round again. 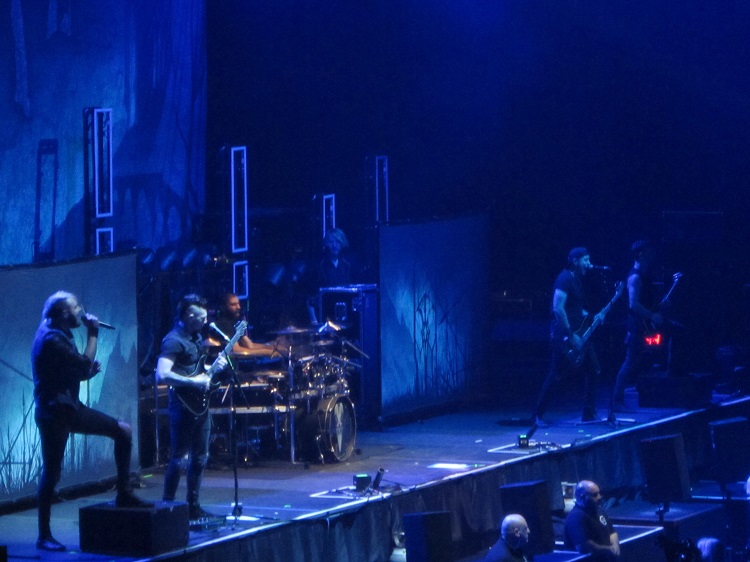 I have to admit I was dreading Florida alternative Metallers Shinedown. I saw them a couple of years ago supporting Maiden and really didn`t relish what I saw. But I`m always prepared to be proven wrong and have to say I enjoyed the first couple of numbers with the rap rock of `Devil` and `Diamond Eyes (Boom-Lay Boom-Lay Boom)` Singer Brent Smith then ventured into the crowd, parting them and then returned to the stage to get them to jump along with the song  `Enemies` This was the first of many occasions that the audience were asked to stand, clap and jump along to tracks such as `Monsters`, `Get Up`, `Cut The Cord` and `Second Chance` which in fairness got the crowd warmed up, which is the purpose of the support band. The fellas shared a cover of the Skynyrd classic `Simple Man` before asking Sevendust`s guitarist John Connelly to join them on stage for `Sound Of Madness` The anthemic `Brilliant` had the faithful waving and fist pumping as the band closed out this sixty-minute set. I have to admit that I enjoyed this more than last time but would prefer them to just to share the songs rather than seemingly to drag each one out. 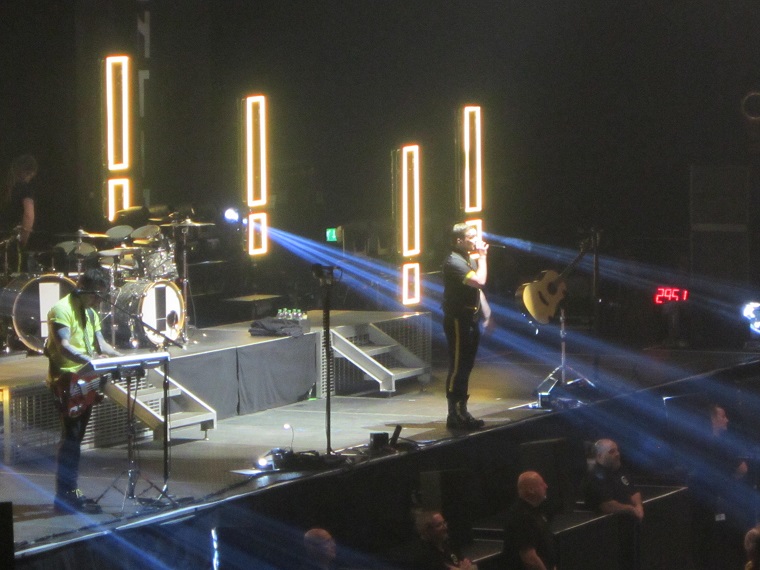 Alter Bridge were formed from the ashes of Creed with Mark Tremonti (guitar, vocals), Brian Marshall (bass) and Scott Phillips (drums) adding Myles Kennedy on vocals and guitar. This has to be one of the smartest moves in rock history. In my opinion Myles Kennedy has the best voice in rock by far, with only a youthful Paul Rodgers able to challenge for that title.

The band have a new album “Walk The Sky” and arrive in Birmingham towards the end of their promotional trek around Europe and the UK before heading back to the States for a US tour beginning in the new year.

The ethereal intro of `One Life` is pumped through the pa system as the guys take to the stage and blast straight into the anthemic `Wouldn`t You Rather` with it`s wonderful guitar riffs, a song that I can only describe as wonderfully heavy at times. The momentum is continued as older cuts such as `Isolation` and `Come To Life` blend easily with this new offering. What I love about this band is that there are no gimmicks, just the band and some rectangular background screens showing images to enhance these songs. The psychedelic rock mixture of `Pay No Mind` follows before Mark Tremonti gives a signature guitar away to a member of the audience whom he feels has been the most radical during the song. A song I love `Ghost Of Days Gone By` gets a dusting down and has the capacity crowd going crazy. The setlist seems to vary slightly each night and tonight we enjoy `Crows On A Wire` before `Dying Light` which I think would make an excellent James Bond theme song. The show moves on with tracks coming thick and fast with `Native Son`, the stunning `Rise Today`, `Cry Of Achilles` and `Waters Rising` amongst them.

The stage is cleared before Mark and Myles share an acoustic version of the touching `In Loving Memory` a song written for Mark`s late mother. The last leg follows with `Blackbird` and `Open Your Eyes` which are almost AB signature tunes before the band leave us with the thumping `Metalingus`

It`s not long before the guys are encouraged to return for another couple of songs with `Godspeed` a dedication to the memory of Mark’s lifelong friend Seth, offering a tender sweeping refrain, “Farewell, Godspeed, goodbye, you have lived, and you have changed all our lives.” and the wonderfully compelling `Addicted To Pain` I have to say this was an excellent show with a band really on top of their game. I`m sure it helped that as this is the latter part of this tour the set has had time to hone in. It`s been three years since this band graced our shores with a tour and I can only hope it won`t be another three before this underrated troupe return.