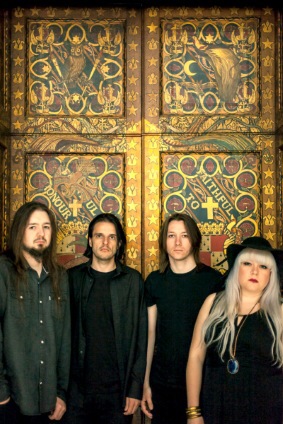 Sweden’s The Order Of Israfel weren’t supposed to be on this bill originally. That the (metal) gods shined on Birmingham was surely appropriate, for you see TOOI are just a bit good. The band have just stuck out, in “Wisdom,” what might be the best album of the year. Part doom, part heavy metal, but full on brilliant. The four piece, led by Tom Sutton, once of Church Of Misery, also have extremely long songs, meaning that they only have time for three tonight. The title track kicks us off, before the Sabbthy freak out of the “The Nocctus,” a quite stupendous thing with more twists and turns than an episode of the Sopranos. They end with “Morning Sun (Santas)” which is the last track on their record, and one which sees them “sell their soul to Him”, which proves, as we all know, that the Devil always had the best tunes. This isn’t a band with potential, TOOI are quite simply the discovery of 2014. Absolutely superb.

Idiots on message boards decided that Nat Bite had no right being here tonight. The majority of us that like metal, but who recognise that there are other sorts of music around, find much to enjoy. The local girl studied at the Birmingham Conservatoire, which makes her talented, and she’s worked with Jeff Walker of Carcass, so that makes her metal as well. Ms Bite (we’ll take a stab in the dark and say that’s not her real name…) plays a set that is part acoustic and part on the piano. Songs like “Circles In The Sand” are lilting pieces that are well quietly delivered by a woman with a gorgeous voice, and no amount of sniping will ever change that. She downtunes on one track “Oxanna” (“I feel a bit more at home in the setting”) which echoes Zep’s “The Battle Of Evermore” in places, but is about a child raised in the Ukraine. Not your normal lyrical content. And not your normal acoustic artist.

Norway’s heavy blues stoners, Lonely Kamel are absolutely the sort of band we like around here. The sort of outfit, in fact, that look like they were born on the road. In a battered old van. And had beards. This is their first time in these parts and they are here to enjoy it. Since we last saw LK (supporting The Sword getting on for two years ago) they have released the excellent “Shit City” record, which has seen them refine their act by making it slightly faster and a little more scuzzed up. “Do you wanna get stoned?” yells singer Thomas on the incendiary title track. Tonight it – and just about everything else they play – benefits from being heard live. “White Lines” (probably best not to wonder it’s about) positively struts it’s way around the tiny Scruffys stage with all the confidence of a bonafide rock anthem. Older material Isn’t forgotten either and the band remain the absolute epitome of no-frills-and-even-less-bullshit-heads-down riffing. They leave promising to return for a longer set – and there is every reason to suspect that said gig will be a cracker.

This, though, is Alunah’s night, and dammit if the local heroes don’t deserve it. Seven years of paying their dues has led to this. The launch of album number three, “Awakening The Forest” and their debut major album release. Not officially out until Monday, “…..Forest” is a doomy tour-de-force. It’s lead track “Bricket Wood Coven” is soon into the set, it and “Mask of ….” sitting comfortably with older material. There is a real feeling, watching Alunah tonight, that the four piece know their time is now and they are going to do everything to make it happen.

It helps that Alunah are experienced live performers – having toured with just about everyone from Paradise Lost to Stone Axe, but in recent months their performance appears to have gone up a notch, and the riffs ring out just that little bit more confidently than before.

They find the time to chuck in a cover (“does anyone like The Cure?” Asks singer Sophie, perhaps more in hope than expectation) and they even make 1980s goth sound like one of their own, while “Scourge Of The Kiss” sounds menacing to follow.

Sophie dedicates “White Hoarhound,” the title track of their last album, to her mum (we don’t ask…..) and it’s huge chorus and solo, show why it was such a favourite when it was released a couple of years ago.

“Awakening The Forest” ends the set and is the perfect showcase of a band – who like most of the rest of the bill – take the great British metal of the early 1970s and give it a fresh twist. Rock folklore has it that heavy metal was born about two miles from this room. It does appear, some 40 odd years later, to be ageing very well.