London based soulful Indie guitar quartet Stereo Honey are the support tonight and on all of the UK dates for Amber Run. I`d heard a little about them but have so say I thoroughly enjoyed their short set. The band comprise of Nicky Boiardi (guitar), Ben Edwards (bass), Jake Black (drums) and singer Pete Restrick. Their songs are quite often written from the narrative of life experiences such as `Angel` which came from seeing the results of a crash on a coach journey from London to Edinburgh near the Anthony Gormley Angel of the North Statue. Also `The Bay` about the 2004 Morecambe Bay cockling disaster. But there are songs of love and loss. The heartbreakingly intense `No One Knows Your Name`, anthemic new song `You Are A Monster` and `What Makes A Man` showcase not only the bands potential but highlight the stunning vocal delivery of the singer who has a wonderfully falsetto voice. The band have an album out next year and it’ll certainly be checking it out. 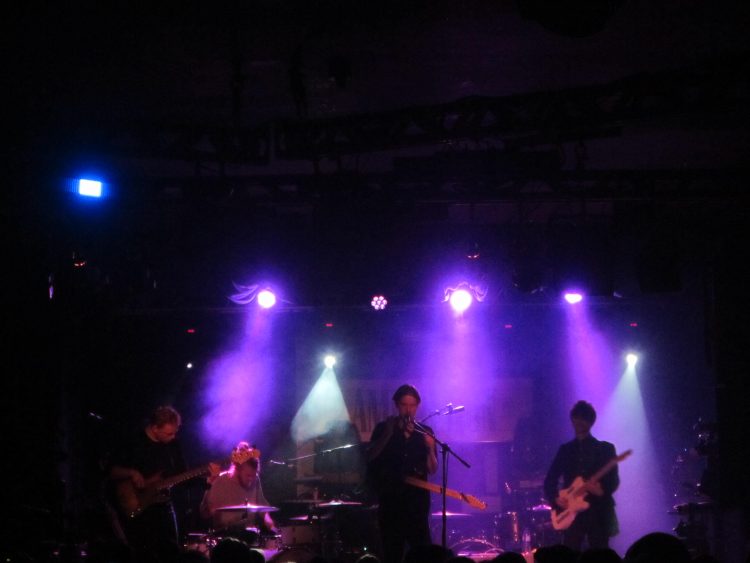 indie three-piece Amber Run were formed in 2012 when the band Joe Keogh (Vocal/Guitar), Tomas Sperring (Bass) and Henry Wyeth (Keyboardist) met at the University of Nottingham.

The guys have three albums with “5AM”. “For A Moment, I Was Lost” and recently released “Philophobia” and there was a nice spread of each of these in tonight’s ninety-minute set.

The shows opens quietly with just the keyboard twinkling of the first few bars of `Neon Circus` before it bursts into a cacophony of noise. A song I really love `Just My Soul Responding` follows and live it has some really pounding drums and Joe`s aching vocals.

There`s a maturity about the newer songs like `No One Gets Out Alive` and `Affection` on which Joe is joined by Stereo Honey`s singer Pete to share vocal duties. `Amen` is a very intense and poignant track and Joe shares that this is the eulogy that he wished he`d expressed at his grandfather`s funeral. Nevertheless, the song is extremely moving as it`s delivered with just a guitar and vocals. The show closes out with another new number in the churning `The Darkness Has A Voice` before favourites such as `Noah`, `Spark` and `Wastelands` sets the audience into a frenzy singing and dancing along.

That was it, a fairly long set covering a flavour of the band’s progression through all of their albums and plenty of emotional highs and lows. The venue was almost filled to capacity so I can only speculate that a bigger location awaits them next time around and deservedly so.