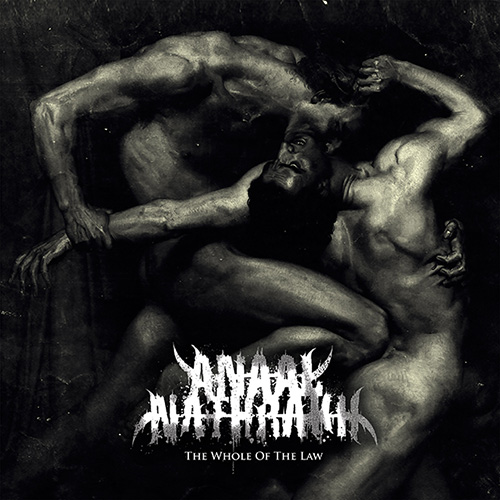 New album ‘The Whole Of The Law’ out now

ANAAL NATHRAKH was created for one purpose – to be the soundtrack for Armageddon, the audial essence of evil, hatred and violence, the true spirit of necro taken to its musical extremes. Since 1999, they have gained a reputation for embodying precisely these things – and now, with their new album, ‘The Whole of the Law‘, ANAAL NATHRAKH has reached the very height of their twisted powers. Due out October 28th via Metal Blade Records, ‘The Whole of the Law‘ marries all of the two-piece’s trademark ferocity and against-all-reason-catchiness with a reinvigorated sense of focus and insane hatred. For a preview of the album, the new single, ‘Extravaganza!’, can be streamed via Terrorizer here:

The first single, ‘Depravity Favours the Bold’, can be heard at: metalblade.com/anaalnathrakh – where ‘The Whole of the Law‘ can be pre-ordered as well in different formats!

ANAAL NATHRAKH about ‘Extravaganza!’: “It’s about the normalisation of murderous violence, the sanitisation of death. The primary way that appears in the lyrics is via executions, but it’s meant to exemplify a more general phenomenon. I suppose it’s of a piece with the famous quote that the death of millions is a statistic. Or the impression you might get from the news, even if you’re someone who pays close attention to the world, compared to listening to Dr. David Nott talking to Eddie Mair on the radio. And in executions, I think the level of sanitisation is quite extreme. Hence the terms used in the verses – the drop, the shock, the state-sanctioned shank and so on, they’re intended to ape the euphemisms we hear all the time. And in sanitising killing, the powers that be shield us from the brutality of reality. That’s where the wailing parts fit in – ‘Hiding behind daddy dear, don’t peek with your sad little eyes’. It’s intentionally made to sound a bit like a child’s nightmare, just as we are infantilised and allowed to be blasé by the things the song deals with. It’s all sometimes presented almost as entertainment, with people talking in terms which suggest a level of ethical concern roughly appropriate to a video game. That’s where the title comes from, and why the ‘ringmaster’ lines are there – ‘Take your seats, one and all! The show’s about to start…’”

Uniquely hallmarked by breathtaking musical intensity, inventiveness and breadth, married with mercurial, misanthropic and sharp intelligence, ANAAL NATHRAKH‘s sound is imbued with a palpable sense of menace that is virtually unmatched in metal. Hailed as “terrifyingly heavy and fierce” (Decibel Magazine), “a master class in extreme metal” (MetalSucks.net), and “…a thrill ride of horrors” (Pitchfork.com) for their previous eight albums and EP, ANAAL NATHRAKH has out-done themselves with ‘The Whole of the Law‘, a sandblasting assault similar to the experience of a demented ocular surgeon operating on one’s head while riding a rollercoaster through hell. Simultaneously fresh and their most mature creation to date, ‘The Whole of the Law‘ will surely earn accolades from fans and media alike, once again. See below for the official track-listing!

‘The Whole of the Law‘ track-listing
1. The Nameless Dread
2. Depravity Favours the Bold
3. Hold Your Children Close and Pray for Oblivion
4. We Will Fucking Kill You
5. …So We Can Die Happy
6. In Flagrante Delicto
7. And You Will Beg for Our Secrets
8. Extravaganza!
9. On Being a Slave
10. The Great Spectator
11. Of Horror, and the Black Shawls
12. Powerslave (Bonus Track)
13. Man at C&A (Bonus Track)

Before ‘The Whole of the Law”s release, ANAAL NATHRAKH will embark on a worldwide tour, which includes their first headlining shows in Japan this weekend (August 19-21)! See below for all upcoming dates.