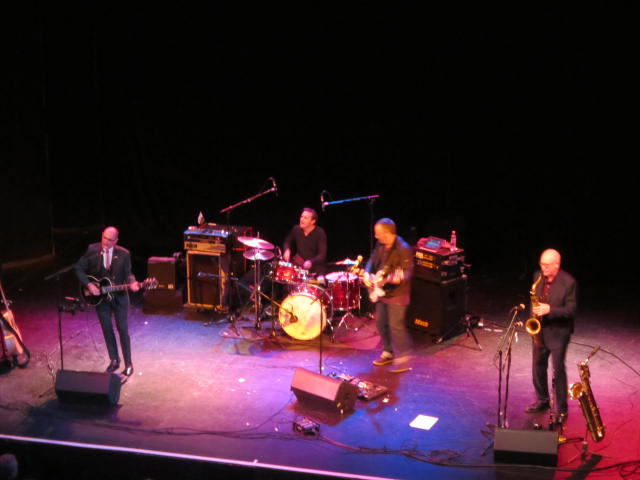 They say lightning doesn’t strike twice but maybe it does. I had wanted to see the very talented Mr Andy Fairweather Low for a long time and then end up seeing him twice within two months!! Last time as special guest of Roy Wood in Birmingham and this evening, at the wonderfully intimate Bromsgrove Artrix. The older gig goers will remember him from his time with the late sixties pop band Amen Corner, solo and as a go-to guitarist for just about everybody who matters. He is ably abetted tonight with his usual Low Riders compadres of Nick Pentelow on sax, Dave Bronze on bass and Paul Beavis on drums.

The show kicks off with an instrumental track before we head into “Life Ain’t No Competition”, the Jimmy Reed classic “Baby What You Want Me To Do” and “Got Love If You Want It” before the quartet come up for air. “Spider Jiving”, “Hymn 4 My Soul” follow before the artist shares where it all started for him listening to the Beatles and The Rolling Stones. He plays a wonderful version of the former’s “I’ll Get You” before playing “Travellin Light”. The band turn their hand to a variety of styles, Blues, Boogie, Jazz and out and out rock numbers and we get a taster of all in the songs that followed before the interval with tunes such as “If I Ever Get Lucky”, “Let Me Be Your Angel” “High In The Sky” “La La Music” “Dance On” and “Petit Fleur”. The final tune highlighting the remarkable talents of brass man and former Wizzard stalwart Nick Pentelow. There is a cracking repartee with the audience as the band joke as to what songs come from which albums. The Brown one, recent dvd and cd release live from The New Theatre Cardiff or the blue one Zone-O-Tone.

After the break the boys return and it’s straight into “Reggae Tune”, “La Booga Rooga” before we get some gospel with “Lay My Burden Down” segueing into “Will The Circle Be Unbroken” with the audience singing and clapping along. A couple of Bluesy tunes are shared with “When Things Go Wrong” and “So Glad You’re Mine”. Two of the artists hits are up next with “Bend Me Shape Me” and “Wide Eyed And Legless” with a Lightning Hopkins instrumental tune “Lightning`s Boogie” sandwiched between. Fairweather Low reminds us that Bend Me was recorded in 1968 and he is now 68 himself.

We get the first song he recorded “Gin House Blues” before an instrumental section covering the Latin flavoured Champs “Tequila”, Duane Eddy covered “Peter Gunn” and The Shadows “Apache”. If we didn’t know how superb a guitarist he was he finishes the set with a cover of “Route 66” in a Keith Richard style.

In the encore we get a snippet of “Rocky Racoon” as requested by an audience member before the wonderful “If Paradise Is (Half As Nice)” concludes a breathtaking two hour show. This was a wonderfully entertaining evening performed by some marvellously gifted musicians. We enjoyed a variety of great music styles and some real comedic banter between the band members, who seem to have a great respect for each other.

I would encourage everybody to get along to see this talented outfit and can only take a little from the lyrics of one of their tunes – who needs paradise when we have you guys.