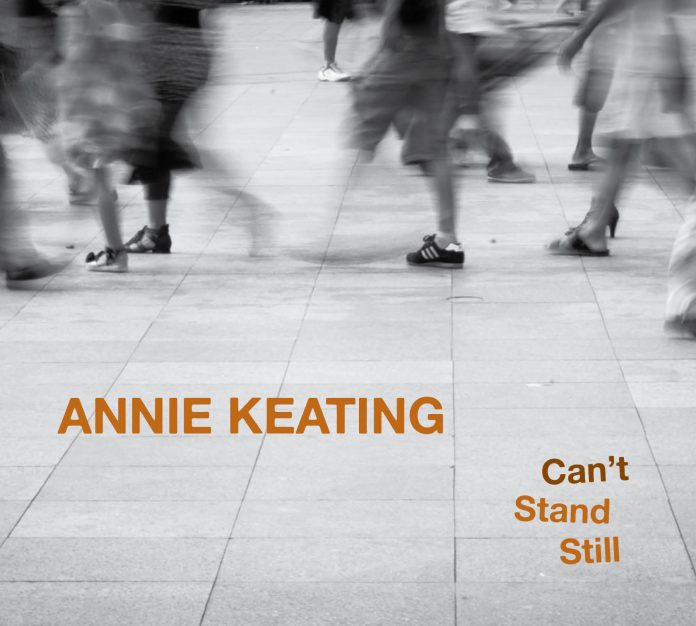 Last time I reviewed one of Annie Keating’s releases – the fabulous “Ghost Of The Untraveled Road” from last year – I made mention of the fact that Annie told me off at the gig I saw her play for sitting behind a speaker and not being able to see properly.

What I never actually said was the gig itself was surprisingly rock n roll. I’d gone to the folk club that night expecting to see some first rate Americana (and I did, don’t get me wrong here) but it was so much more. As I put it on the night: “The recent single “Trouble” is fun, but “On The Loose” boasts an acoustic sound so primal that you’d swear you’d just walked into Sun Studios the moment that Elvis cut “It’s Alright Mama.” Keating ends the song on her knees – on a stone floor no less.”

That rocky spirit is all over this too. If “….Road” was essentially a road diary, then “Can’t Stand Still” is six songs from the top pocket of an itinerant troubadour in the grand tradition. But they are six songs that explore that rockier side in a very real way.

Opener “Beholden” is three minutes of an anthem to not being told what to do. “I’m no puppet, you can’t pull my strings” she sings here, before the pay off in the chorus: “So go-go-go get out that door. No-no-no I don’t need you no more.” And you’d best believe that whoever it is that is being given the opportunity to leave had best take it.

The really interesting thing, though about this is the music. If that one has a wander down some White Stripes type roads, then the fabulous “$20” is the barroom rock n roll of Dan Baird, of the Stones, and if “Beholden” has a solo that screeches, then this one is built round the piano of Adam Podd.

The reason for this change? Well, because you can is as good as any, but there might be a little more to it. “$20” she offers this. “How’d we get this old? Pushing 50 like a hurricane and it’s 20 below.”The onset of aging – I am in my mid 40s this year – kinda does that to a person,  you find you have things to say that you haven’t said before. Things maybe, like the soul infused “Mother Of Exile”, with its beguiling organ work, and a chorus that is subtly brilliant.

“Sun And Moon” is more of what you might expected. “I like walking cos I can’t stand still” goes the first line and that frames the whole record – hell, maybe Keating’s life – because there is a clear need here to make music.

“Boxes” (and at the risk here of over-analysing what is just a superb record) is perhaps born out of a desire to not be put in one, and maybe there is a hint or two of “20th Century Boy” about the main riff too.

This wonderful six tracker ends with a cover of Cat Stevens’ “Trouble”, which benefits from a supremely cracked delivery, and adds a real lugubrious feel to the work here.

What “Can’t Stand Still” proves, however, is whatever Annie Keating wants to do, whether it is rock n roll, more conventional singer/songwriter stuff, or interpreting other people’s songs she is a rare talent, and what’s more. If you stand still you end up going backwards. A desire to move forwards is all over this.