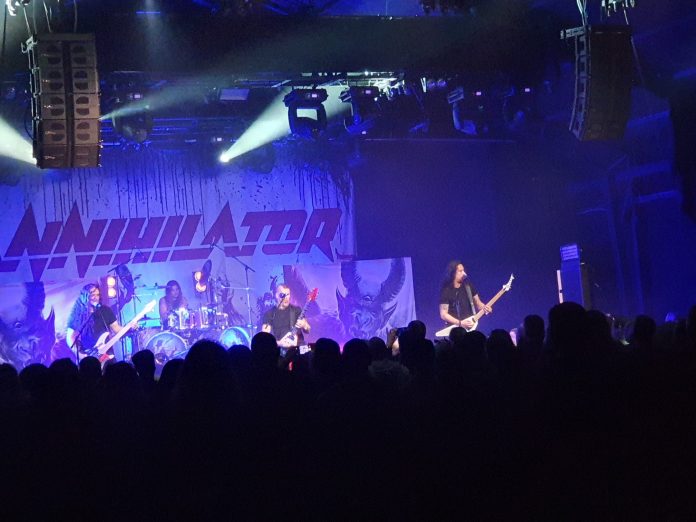 The best thing about music is there are no rules. There is no retirement age. There is no limit on what you can and can’t do.

The more and more you go to concerts, the more bands are celebrating anniversaries of classic albums, classic line-ups, whatever.

And that’s great, because it means the music has lasted, has connected for that long and endured.

Annihilator are a case in point.

Jeff Waters (now an English resident, as he confides somewhat sheepishly here) has piloted Canada’s finest thrash metal troupe for more than 30 years. It’s been a bumpy old road, too – crikey, I might be the only person in the Western World who hasn’t played in the band to be fair – but the music? Well that stands up with anybody’s.

And that, really is true here.

Now, that anniversary thing? Well, its 30 years since the seminal “Alice In Hell” came out. That crossed over too. Us glam kids, we bought it, so did everyone else. And Waters and this new line up (including a drummer in Fabio Alessandrini who wasn’t even born when it came out) could have turned up, played it, and left. That would have been what most bands would have done. Not here.

In fact, they are doing that rare thing, and touring for the love of it. They’ve got a new album out in January next year – and the one song they play from it, “Psycho Ward” seems to herald a return to some real old school fun – but other than that, this is just a celebration of this band and its legacy.

And it’s a blitzkrieg burst too. “Betrayed”, “King Of The Kill”, “No Way Out”, that isn’t a bad start, and really there isn’t a let up either to their credit.

Their often overlooked, yet stellar 90s material, has stood the test of time way better than many thrash bands did or have, as a mighty “Ultraparanoia” proves, and the fact that “Tricks And Traps” from late in that decade is left so late in the set suggests Waters agrees.

The main set concludes with “Phantasmagoria” which in many ways sums them up. Classic sounding, fun metal, played by someone who clearly loves what he does.

Waters actually plays this perfectly. Talented enough, if he wanted, to overplay, instead he knows the songs are key here and only a couple of times does he truly cut loose.

The encore is heavy on “…Hell” tunes, dedicated to Randy Rampage, who sang on the album and who died last year, “Burns Like A Buzzsaw Blade” and “WYTD” are fitting tributes.

Then comes the “one I don’t like unless we play it” as Waters puts it. The hit, if you will. “Crystal Ann” can only mean “Alison Hell” after all, and it does. And Wolverhampton loves it even if Waters doesn’t.

The crowd, actually, includes KK Downing. It’s his venue, but he’s stood by the sound desk watching like any other fan. And that is interesting in itself, because there might be a case for saying that these days Annihilator perhaps don’t get the plaudits or the credit they deserve, but the respect of his peers, his crowd and – perhaps – his heroes, is probably more valuable for Jeff Waters, because this seemed to be about the music. Nothing more and nothing less.