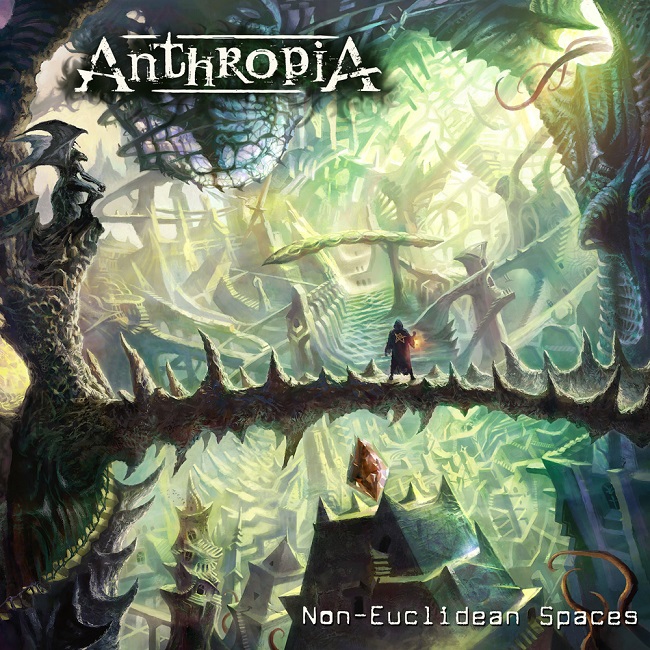 A quick search on the internet reveals many a thing. Pertinent here is this: H.P. Lovecraft was an American author who achieved posthumous fame through his influential works of horror fiction. Virtually unknown and only published in pulp magazines before he died in poverty, he is now regarded as one of the most significant 20th-century authors in his genre. He created the fictional world of Cthulhu Mythos.

All of which provides the inspiration for this, the new album from Anthropia, a French Prog metal band.

A concept record based on Lovecraft’s work, “……Spaces” – who’s name comes from a form of Geometry connected with his writings – there is a baffling explanation on Wikipedia (if you follow it, drop us a line, please!) – is a weighty and at times complex affair, but, blimey it’s good.

Taking the works of Lovecraft as a starting point, the album centres around a character called Raymond Carter, who at 50 years old begins longing for his youth. We follow his journey.

Which is great, but let’s boil everything down to its basics and make the question actually rather simple: if you are a philistine like this reviewer and (whisper this quietly) hadn’t actually heard of HP Lovecraft before receiving the press pack for this release, does it still work on a musical level?

The band cite influences such as Dream Theater and Symphony X and make good on that pretty early on, but there is another strand running through “…..Shapes” that gets us equally excited. That of the mighty Ayreon. The genius behind that band, Arjen Anthony Lucassen, takes care of the narration and the overall effect here is akin to their magnificent tour-de-force “The Theory of Everything.”

In fact, so good “Non-Euclidean Spaces” as a whole piece of work, and so stunning is the craft and musicianship on show that it feels almost unfair – and actually redundant – to pick out individual tracks, but “Part Of Them In Me” which stretches out over nearly 10 minutes and features some wonderful vocal interplay between founder member Hugues Lefebvre and Nathalie Olmi, even on an album as good as this one, is a little special.

“Seeds Of Decay” is also highlight, and “Crawling Chaos” is perhaps the most overtly Dream Theater moment here. “The Snake Den” is a veritable metal gallop to begin with before settling down. Elsewhere “Lost In Time And Space” is evocative and grandiosely superb, and “Fuoco” with it’s almost flamenco flourishes, is the band stretching out and having fun.

With “Non-Euclidean Spaces” Anthropia have created something that almost defies description. There is a little bit of everything here, and like only the very best Prog metal can do, it all works on whatever individual level you want it to. HP Lovecraft would hopefully be proud that his work inspired some musicians to make something this exceptional.

BAND OF THE DAY: NICE BISCUIT

DEWOLFF PACK IT IN