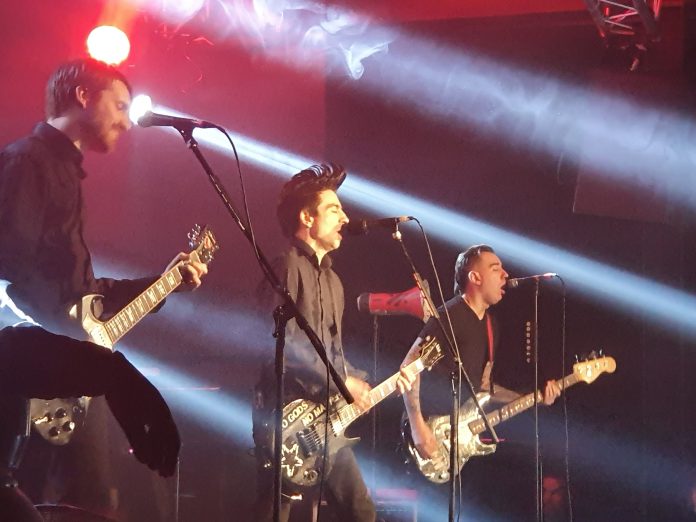 Anti-Flag, it has to be said, are a strange dichotomy.

On one hand, they don’t amble out, they attack. And their first song, “Christian Nationalist”. From their genuinely brilliant new record, manages to make this chorus catchy.

“You’re no better than the rest

All dressed in black, they are like some invading force, and yet they are an army with a positive message.

Justin Sane – probably not, in all honesty, is real name (but then Mr. and Mrs Hectic probably didn’t call their first born Pat, either and he’s playing drums – has written on his guitar, “No Gods. No Masters.”

Here is a show where everyone is equal. And the ground rules are laid from the start. “No racism, no sexism, no fascism, and no bullshit” explains Sane.

There is no BS anywhere near this 75 minute hurtle through songs that are described probably best as commercial punk rock with a message and a social conscious that is anything but corporate.

But the best protest songs are the ones you can scream on the picket line, right? To that end, try and resist “Trouble Follows Me” or the gloriously titled “The Press Corpse”. You can’t. They are supposed to stick with you, and they do.

Chris #2 on bass, is also expert with a loud hailer, and it gives “The Criminals” and “Hate Conquers All” a real kick.

The thing that Anti-Flag do better than most is they back up their sloganeering by actually, you know, meaning it. For many bands, “Fuck Police Brutality” would be something to put on a meme on social media to look cool, you get the feeling here that these men would all cheerfully call it out.

Aided tonight by Erik Pitluga on backing vocals, the five are heavier than you might imagine, more abrasive and in your face, they structure their set in a clever way, so that it never really loses momentum despite the discussions on empathy and so forth. But that is part of the package, and is welcomed here.

After the chanted “This Is The End (For You My Friend)” sees them together in unison with their “family” as they put it, they return for a 4 song encore which cranks it up still further.

“American Attraction” and “The Disease” are withering put downs of not just their homeland, but with relevance to the increasingly “Trumpian” goings on here as Johnson and his evil spin doctor Dominic Cummings get to work, and that is why AF work here too.

Moreover they have songs like “Brandenburg Gate”, which is proceeded with an attempt to get everyone to hug their neighbour, which never works all that well with British people,  sees them joined by Kenda Legaspi – after she’d sang for The Creepshow in support – on acoustic guitar, but which possesses a hook which doesn’t leave once its lodged in.

“Die For Your Government”, the title cut of their debut album is a riotous end too. Hectic and Sane perform it from in the middle of the pit, where you get the sense they always wanted to be all night, but after they finish, Whitney Houston reminds that she will always love us, as it is pumped over the PA. It is a timely re-enforcement – as indeed the whole night had been – that love is all you need. Oh and punk rock. That helps too, sometimes.

And there’s a reason Anti-Flag have been making records for a quarter of a century give or take. They are rather good at what they do.