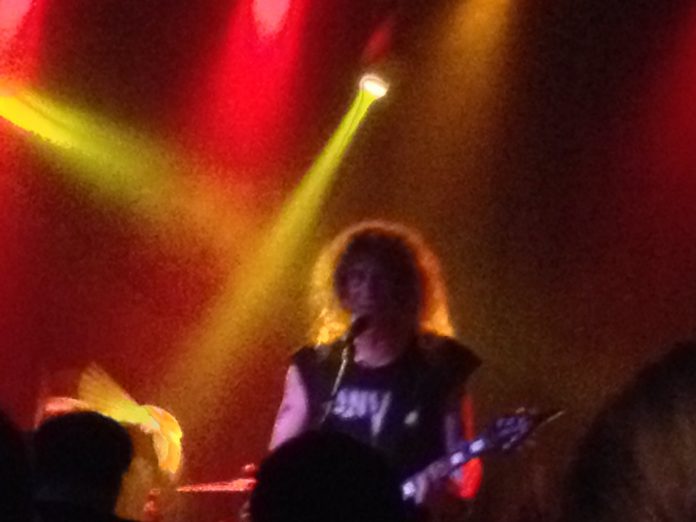 Metal might be on metal as Anvil hit the birthplace of metal for a night of… urmmm ….metal

Signs Of Fire are very much a band on the rise. They only formed at the beginning of last year but already their grooving brand of hard rock, like on the brilliant “Rally Them All,” is showing ever greater signs of maturity, and they’ve got the balls to cover Sabbath in Birmingham – and pull it off too – when they do “N.I.B”. Actually it’s their own original songs that really stand out, as they always do, with the mighty “Cain And Abel” particularly impressive. We’ve said it before on these pages, but it needs saying again, there are very definite signs that Signs Of Fire are going to be very good indeed.

The West Midlands very own meoldic metal warriors Awake By Design were the natural choice here. Their twin guitar sound is augmented by keyboards, and there is a Maiden-cum-Priest- classic feel here mixed with a touch of Queensryche for good measure. The six piece are a polished outfit. “Tomorrow’s End” soars like a track from “Seventh Son Of A Seventh Son” and let’s face it, if you are going to take inspiration from somewhere it might as well be the best band on the planet. “Tired Of Angels” does something similar and races off into the distance, while “From Disgraced Lands” finishes off a set full of lofty ambition.

Local support out of the way, it’s time for the South Coast’s Premier wrecking crew Dendera to raise their horns to the sky. The Portsmouth based battalion have just released their new “Pillars Of Creation” to rave reviews – not the least of which was on MVM – and they very neatly distill everything that’s ever been great about metal from Dio and Rainbow to Maiden and Sabbath, before stopping to give it a modern twist. They fairly burst onto the stage with a selection of tracks heavily weighted to “….Creation,” and gallop (all metal meanings of the word intended) through the rest of their set as if lives depend on it. Bluntly, Dendera are superb. It’s more than songs like “The Daylight Ending” being excellent, it’s more than the band being tighter than a ducks arse (although both those things are true) it’s a feeling that being in this band is all Dendera ever wanted. One of their songs – and it’s a cruncher – might be called “Disillusioned” the band are anything but. Closing epic “Edge Of Tomorrow” amply demonstrates that.

Anvil are metal’s great survivors, it’s underground heroes, it’s everymen and it’s film stars. Nearly 30 albums into their their career the Canadians have surely earned the right to come to the home of metal and rock out.

Where some bands snarl and grimace, Lips and the boys grin. They know what they do is daft. Or as main man Lips puts it: “Growing old? No fucking choice. Growing up? Totally optional…..”

Which is exactly why men who are past, shall we say, a certain age, can reasonably play a track called “666” and race through a tune from 1981 called “School Love” and why “Badass Rock N Roll” is precisely that.

New bass man Chris Robertson gets his slot in “Winged Assassin” and “This Is Thirteen” drips with Sabbath-like intent. But this is set that is essentially wall to wall fists in the air ebullience.

Most importantly it’s all wrapped up with the caveat that the band love metal as much as we do. And they couldn’t give two shits whether that’s cool or not.

Anvil then: impossible to dislike.