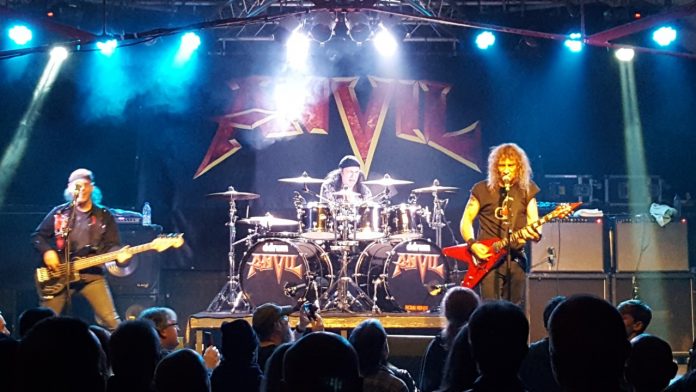 There was a period of time not that long ago (in the 90’s for those pedants out there) when Anvil ceased to exist the wider public, despite still recording and playing to ever smaller venues.  And then in 2008 the docudrama Anvil! The Story of Anvil was released and with a plethora of big names rock stars appearing in it and declaring their love for the band, the band were once again on the rise.

Formed by school friends Rob Reiner and Steve (Lips) Kudlow (the only two originals still in the band) Anvil have often described as a pub band by those who weren’t there when they released Metal on Metal in ’82, Forged in Fire in ’83 and appreciated the impact that those albums had at the time. Despite their long absence Anvil released studio album number 17, ‘Pounding the Pavements’, earlier this year to both good and bad reviews.

Steve Kudlow will never be mistaken for a poet laureate and opening the set with ‘March of the Crabs’, ‘666’ and ‘Daggers and rum’ played later, tells you pretty much everything that you need to know about the lyrical content, but they are played with a big grin and tongue stuck fairly firmly in cheek.

The Robin2 is half full as the band amble on stage and Kudlow immediately steps down into the crowd to play ‘March of the Crabs’ and poses endlessly with fans for selfies. The set list stretches from ‘81’s ‘Ooh Baby’ off the first album right through to the three tracks from the new album. ‘Bitch in the Box’ is about sat navs getting you lost whilst on tour. Kudlow dedicates ‘Thirteen’ to Chris Tsangarides who passed away recently and was the producer on the album they were recoding during the filming of Anvil!

There’s no endless switching of guitars as Kudlow sticks with a glittery red flying V and little subtlety in the set which feels at times as though you’re being assaulted with, well an anvil. Robb Reiner pounds his kit with some power so it’s a surprise to hear that his drum solo (Swing Thing) pays tribute to the great Buddy Rich, but sounds little different to the rest of the set.  It’s not often that you see a guitar solo played with a vibrator but that’s just what we get in the middle of ‘Mothra’, a song about a Japanese monster.

The main set ends (of course) with ‘Metal on Metal’ before they return for ‘Get Ready’. Let’s be honest about this, what Anvil do is very simple and they play purely to ensure that the crowd goes home happy. And on that basis, mission achieved at the Robin2.