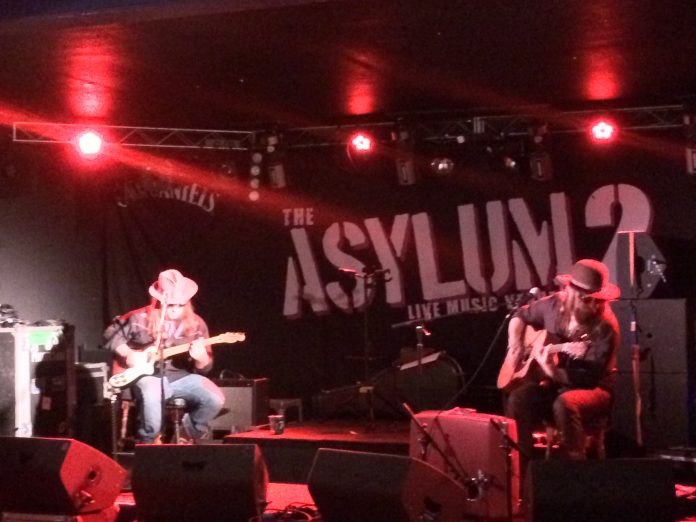 If you’re looking for music in all the usual places from Arkansas Dave (Dave Pennington to his mates) chances are you aren’t going to find much.

The man from Camden, Arkansas, has an album on its way, but other information is a touch scarce. For now the only place to really catch him is onstage.

To be fair to Arkansas Dave, that does seem to be very much his natural environment too, and here with his old friend and fellow Arkansas musician Drew DeFrance, he puts on a fine 45 minutes for a rather more chatty crowd than you might have hoped for.

Split between originals and covers, there’s something of the honky tonk about the opener, complete with hook line “I’m bad at being good” – these boys ain’t joking either, you can bet they have a good nose for trouble and are mighty good at getting in it.

“Bad Water” is better still, a song of real emotion about their hometown it is augmented with some fine kick drum from Dave, while not to be outdone Drew plays the Slide Guitar parts of “Squeaky Clean” with a whiskey glass. If it’s that kind of night you can bet it ain’t the first they’ve had like it, nor will it be the last.

The covers are clearly important to them too. Little Feat’s “Willin'” is gentle, but “Champagne And Reefer” by Muddy Waters (AD’s hero) is anything but.

The party truly gets started right at the end, with people dancing in front of the stage. Whether other Arkansas Dave gigs end like this who knows, but bluesy,  hard drinking country rock n roll is meant to played live not streamed via MP3 and this old time spirt was here in abundance tonight.

A brief snapshot it might be, but there’s every reason to suspect there is much more to come.