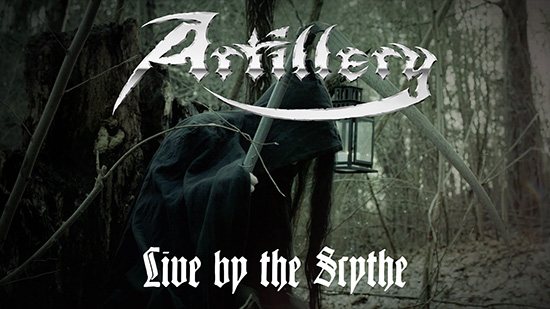 The band has now launched a video clip for the song ‘Live By The Scythe‘! Comments ARTILLERY: “It was great fun to record the video for ‘Live by the Scythe’ on Fyn in Denmark. The filming was done in an old castle, Hindsgavl castle, in the forest and in a school near Hesselager. The story behind the video is about death, fate , the meaning and acceptance of life and death. The video was done by M&M Production who also did the video for ‘Legions’.”

Surf over to the landing page at metalblade.com/artillery to watch the video for ‘Live By The Scythe‘! At the same location you can stream the first single ‘In Defiance Of Conformity‘, check out the front art and the pre-order section. “Penalty By Perception” will be released as a limited Digi-CD with bonus track, as a double-vinyl and on all digital outlets. You can order an exclusive shirt bundle through the landing page.
Certainly, old and new fan alike are excited about new album, “Penalty By Perception“, where they’ll have 11 tracks to learn. Written over the course of the last two years, ARTILLERY‘s seventh full-length draws from classic albums like ‘Fear of Tomorrow‘ and ‘By Inheritance‘ as well as ‘When Death Comes‘ and ‘Legions‘. “It’s an ARTILLERY album that’s both familiar yet modern in its attack. “Penalty By Perception” has the typical ARTILLERY riffing, with powerful drumming and melodic singing,” asserts guitarist Michael Stützer. “It’s full of catchy hook-lines. We also wanted the sound to be a bit heavier and more powerful than on ‘Legions’.”

Thanks to producer Søren Andersen and Medley Studios, ARTILLERY got the sound they were looking for. “We worked really hard together to get this amazing sound. I feel the band have come up with some great songs. The best musical performance in the history of Artillery. Can’t wait to hear the fans’ reaction!”

“Penalty By Perception” track listing:
01. In Defiance of Conformity
02. Live by the Scythe
03. Penalty by Perception
04. Mercy of Ignorance
05. Rites of War
06. Sin of Innocence
07. When the Magic Is Gone
08. Cosmic Brain
09. Deity Machine
10. Path of the Atheist
11. Welcome to the Mindfactory
12. Liberty of Defeat (Bonus Track)