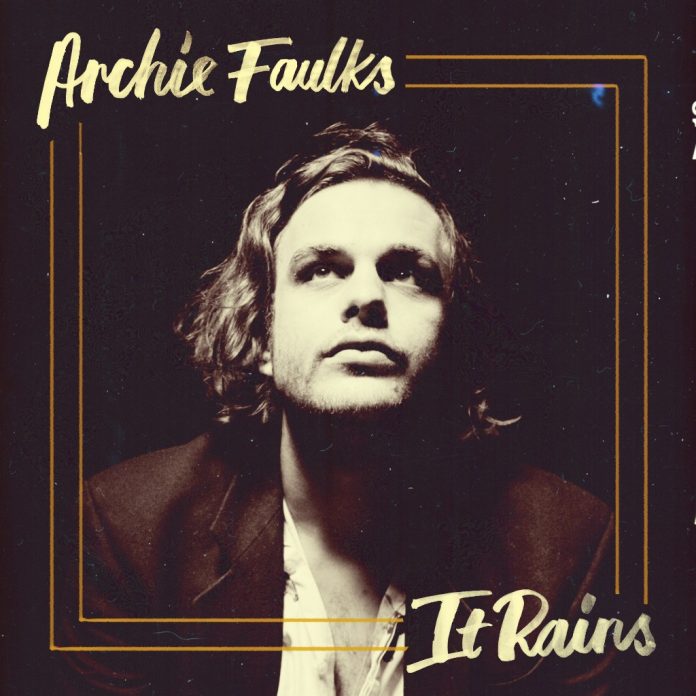 Regarding the single Archie says, “I wrote ‘It Rains’ about a dying but once great relationship. All we do now is fight and get back together again; with the memories of the glory days being the only thing bringing us back to each other. The love is still there but I realise its no longer helping either of us, but rather taking over our days and nights with worry, anger and fear. It’s a love for things we did together and the feeling we gave each other, but not for the other person themselves. The song is the realisation of this but wanting to retreat to ‘our place’ and cling on for a few more days in the vague hope that we can regain an element of the past and not let us be washed away by the flood.”

‘It Rains’ is the debut single from Archie Faulks, who first rose to prominence under the moniker Tenterhook in 2014. As Tenterhook he enjoyed tearaway success over the course of two EPs, which spawned radio hits that led him to be featured as Zane Lowe’s Next Hype on Radio 1, while also receiving support from BBC 6Music and Radio X. He became a worldwide No.1 on Hype Machine, clocked up millions of plays on Spotify and completed a number of tours across the UK and Europe playing with the likes of Asgeir and Rhodes.

Explaining the transition from Tenterhook he says, “I first started releasing music when I was 18, with hindsight perhaps it was a little too soon and I wasn’t happy with the trajectory I was heading in both artistically and mentally.”

He continues on the time away spent focusing on himself musically and lyrically, “I’ve been writing all the new material on my own, trying to create an honest and heartfelt record to both laugh and cry to. I felt like going under my own name so that I no longer had a barrier to hide behind, it’s forced me to face my own truths and make some difficult life choices which has hopefully made me a better songwriter and person.”

Europe got a sneak peak of the new Archie Faulks sound earlier this year when he played a number of shows with Isaac Gracie that went down a storm. To celebrate the release of ‘It Rains’, he will play his first ever headline show as Archie Faulks at London’s Servant Jazz Quarters on September 4th. Tickets are on-sale now via Music Glue.