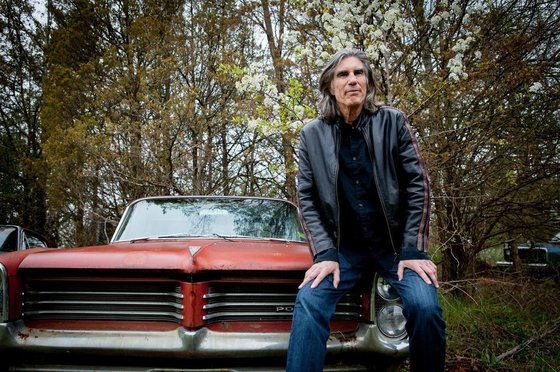 For years, Walter Salas-Humara has split his time between making music and visual art, so it’s not surprising that Walterio, his August 10, 2018 release on Rhyme & Reason Records, contains rich imagery — both lyrically and on its cover. But one of the strongest images it evokes actually comes from the music itself, which might be described as the sonic equivalent of a tree — a rock ‘n’ roll family tree.

Tracks such as “Here We Go,” “She’s a Caveman” and “Out of the Band” can trace lineage back to the Silos, the still-kicking band Salas-Humara co-founded in New York’s post-punk ’80s scene. Playing alt-country before anyone called it that, they werenamed Best New Artist in the 1987 Rolling Stone Critics Poll— which temporarily deep-sixed Salas-Humara’s art-career plans.

These songs also recall the punk-edged roots rock of the True Believers, which featured Salas-Humara’s pals Alejandro Escovedo and Jon Dee Graham (a Silos contributor), and the Setters, once labeled “a cult-favorite roots-rock supergroup,”in which Salas-Humara played with Escovedo and the Wild Seeds’ Michael Hall.The muscular musical spirits of Chuck Prophet, another Silos guest, and Bruce Springsteen also permeate the album, which branches into upbeat pop-rock (“El Camino de Oro”), throwback teen pop (“I Want to Be With You”) and bluesy soul (the vaguely Ray Davies-reminiscent “Should I Wait for Tomorrow”).

Salas-Humara, who produced, also crafts a seductive rhythm for “Hecho en Galicia,” which translates to “made in Galicia,” the Spanish province where his grandparents were born. They immigrated to Cuba, where both his parents were born, early in the last century.

Salas-Humara was made in Cuba, too, but born in America. (The album’s title is his Hispanic nickname.) He spent a good chunk of his Florida childhood studying drums, which, of course, led to teenage rock ‘n’ roll bands. Then he got into jazz, and prog-rock. When punk hit, Salas-Humara was studying art at the University of Florida at Gainesville — Tom Petty country — and playing in a jazz-funk band.

“My art-school buddies were like, ‘Fuck, we should have a band. Anybody can do it,'” he recalls. “And I said, ‘Well fuck, if anybody can do it, I’m not gonna play drums anymore. I’m gonna get a guitar.'”

He punctuates the thought — and many others — with his charming, easy laugh. A man who knows better than to take life too seriously, Salas-Humara also injects his songs with well-sprinkled doses of humor. Discussing his songwriting, which started on that guitar, he almost cackles as he describes Walterio’s final track, “Out of the Band” — in which he rhymes “chorus” with “dinosaurus” and “solo” with “Quasimodo.” Lifted from a theatrical project he co-wrote with novelist Jonathan Lethem, the tune unwinds the ironic saga of a band with one player who’s so incompetent, the others kick him out — only to face an audience demanding they keep playing the one song he wrote. “They have to play that song over and over because that’s the only song anybody cares about,” Salas-Humara explains. “And they have to admit that the rest of their music is nothing but shit!”

That fate likely never befell Salas-Humara, though he admits he was confused by the public’s perception of the Silos — because it differed so much from his own. He thought they were an art-rock band, à la Sonic Youth or Swans. “But people who actually listened objectively saw this very honest, almost folk-rock thing,”he recalls. “Someone came up to me and was like, ‘Your shit sounds a lot like Gram Parsons.'”

Now he willingly embraces his troubadour side. It’s evident on “Will You Be Ready,” one of four Walterio tracks written at the Steel Bridge Songfest, which Timbuk3 veteran Pat MacDonaldhosts annually in Sturgeon Bay, Wisconsin.

Accompanied by Jonathan Rundman’s acoustic picking, harmonica and harmonies, Salas-Humara ponders what “armchair patriots” agitating for revolution might actually be willing to sacrifice for their beliefs, or if they’d even know who — or why — they’re fighting. It’s not a protest song per se, but it certainly asks relevant questions.

Another songfest composition, the Vee Sonnets co-write, “El Camino De Oro,” takes a more positive tone. “The central character of this song is the community, and the power it wields if everyone sticks together, collaborates and creates a harmonious life,” Salas-Humara explains. “The refrain goes, We will not be silenced/Let us raise our voice to the power of the community!”

Then there’s the campy “She’s a Caveman,” written with then 15-year-old Wisconsinite Tarl Knight.”Pat invites him to the festival every year because the kid’s so fascinating,” Salas-Humara says. “He came up with some fantastic lines; my favorite is, She can hunt and gather me/She can carry me across her land bridge.”

Salas-Humara originally recorded Walterio’s lone cover, “Hard (Only Human),” as an homage to its author, MacDonald, whose friends re-created all of his songs on tribute albums while he battled cancer. This one’s sarcasm-dripping lyrics might even cause flashbacks to Timbuk 3’s megahit, “The Future’s So Bright I Gotta Wear Shades.” “I enjoyed it so much that I did a more beefed-up version for this album,” Salas-Humara says. “It’s super catchy, and I just think it’s hilarious.”

He’s more introspective in “Come in a Singer,” a bluesy, chimey guitar ballad, written with K Phillips, that examines the ups and downs of a creative life. “This song speaks to every artist’s desire to be remembered, and especially, to have their work remembered,” Salas-Humara notes. “We come into this life creating our songs and weaving our stories, and leave behind memories and the songs that embody them.” He reinforces the message by dedicating Walterio”to all my fellow artists, musicians and writers.”

Salas-Humara’s legacy would seem secure; his name is on 24 albums and his dog portraits even appeared in the film Get Him to the Greek. (The roving pug on Walterio’s cover depicts his somewhat Rodrigue-influenced, exaggerated-eye style.) But he’s hardly ready to call it a day.

“It’s still really fun for me,” he says of his musical pursuits. “In fact, I’m much happier than I’ve ever been in my life. I really enjoy traveling around entertaining. I see myself as an artist, but I also see myself as a communicator and entertainer — and teacher and mentor. And I love that. Back in the day, the Silos just blasted everybody’s faces off. We hardly talked at all. Now, I play a song, I talk. Then I hang out.”

But not for too long, because Salas-Humara, who has addresses in Flagstaff, Ariz., and New York City, is still driven by the wanderlust that inhabits most troubadours. He celebrates adventurous spirits in “Here We Go,” in which he sings, From the cafes of Amsterdam/The Hippie Trail to Afghanistan/We’re so free … In the speakers there’s a wicked melody/and in our heads a harmony/and at the journey’s end, it all begins, again my friend.

As for beginning again, Salas-Humara says he never imagined he’d sign another record deal at this stage of his career. He was shocked — and pleased — when he was approached in 2017 by a co-founder of Rhyme & Reasons Records.

He’s hoping he can add to their success — and his own — with Walterio.