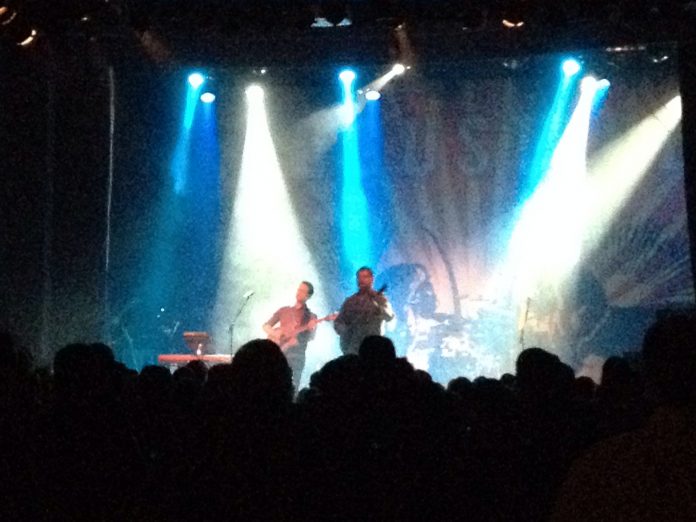 The new E Street Band? How about the first Augustines? William and the boys give Wolverhampton a taste of real rock n roll.

They say you never forget your first time, well about six months ago MVM (before we were MVM, if that makes sense) saw one of those real life affirming gigs that was more or less perfect. Raucous in places, serious in others, it was, we babbled excitedly at the time, what it must have been like watching the E Street Band in the early days.

Well, now the band that gave us such an evening is back. Augustine’s (no longer finding use for the We Are prefix to their name) are having a winter jaunt. And we have returned too, surely it wasn’t a fluke, was it?

For those that are still unaware, Augustine’s are from Brooklyn, and sing enormous, weighty, emotional songs (frontman William McCarthy has a tragic back story) which infuses the music with a darkness that is both real and tangible. And yet, there is an uplifting quality to the band which is never far away. Think the “Born To Run” album rewritten for the modern age and you are kinda close.

Listen to Augustines tonight, about half an hour into their 100 minute set as they play “Juarez” it feels cathartic. That it contains lyrics about death and alcoholism is almost secondary, this is confessional music on a grand scale.

The band only have two albums out – that being the case you almost don’t want to speculate how good they might end up being. They have evidently tapped into is that Everyman quality that makes their audience think they feature in the songs. In that context, then, “City Of Brotherly Love” becomes a veritable anthem, with just McCarthy on vocals and Eric Sanderson on piano, it should be fragile but it isn’t. What it is instead is a tale of the singer being at rock bottom four years ago before this band turned his life around – he explains this with a story shot through with trademark brutal honesty at the tracks halfway point. It should be uncomfortable, hell, it is uncomfortable, but it’s real. This is McCarthy’s life laid bare up on stage. And that, right there is why Augustine’s are special. Why, in a world of homogenized pop bullshit and X Factor they matter quite so much.

“Cruel City” ostensibly ends things, before the band returns and tries to do it’s busking thing. That is to say they turn the amps off and McCarthy and Sanderson play as if in their living room – it worked brilliantly in Birmingham in the spring. Not so here. For the first – and only – time the show falls flat. A section of the crowd isn’t ready for such an approach, and it takes a few minutes for Wolverhampton to get on board.

Augustine’s however, manage to turn it around. They do this by plugging back in and ripping in to “Now You Are Free” perhaps the pinnacle of all they are trying to achieve, it’s “what are you running from” refrain especially poignant here.

The band afford themselves a second encore – this one begins with just McCarthy and masses of feedback before “Book Of John,” perhaps the heaviest number of the evening finishes it all.

There is no band that right now does quite what Augustine’s do and there are very few bands that have ever been quite this warts all lyrically – Alice In Chains, perhaps but in a different context. These guys are the most real of real deals. And no, it wasn’t a fluke.