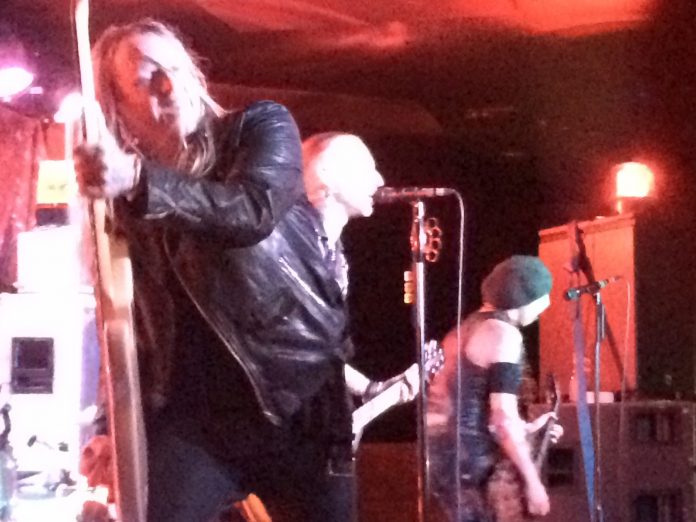 Look at them, man. Backyard Babies are back

It’s was just up the road from here at the much missed Dudley JBs on 1st October 1998 (and don’t bother checking the date as it was this reviewers 23rd birthday) where one of the greatest gigs ever took place. The opening act was Danny McCormack’s post-Wildhearts endeavour The Yo Yo’s – and a star struck MV was stood by Ginger, who turned out to be lovely – then came crossover merchants Radiator, but the night was all about what was then, just about our favourite band, Backyard Babies. What followed passed into folklore.

The band had a few months earlier released the stone cold classic “Total 13” which had, rather neatly, distilled everything that was cool about rock n roll into one handy package. We can still remember the review from Ray Zell in Kerrang! Which concluded: “when they eventually blow up the Millennium Dome they’ll use Backyard Babies as the house band.” And good god, how they proved it that night.

All of which is a roundabout way of explaining why so many blokes of around 40 are braving a freezing Wolverhampton evening to be in The Slade Rooms. This is the first date of the bands first UK tour for ages in support of their first album in seven years, the return to form that was “Four By Four”. Expectations are high and there’s a buzz in the air.

First though, there’s the not inconsiderable matter of Heavy Tiger and the Swedish trio don’t intend you to forget them in a hurry. Three young ladies dressed in the best jump suits since Vegas-era Elvis and with all the stage presence you could ask for. Nominal singer Maja – she’s the guitarist too, drummer Astrid also takes vocal duties a few times – has a stage persona that is part Lita Ford and part Lemmy. That is to say she looks angelic but you feel you’d better clap along when she urges you to do so just in case, and that’s kind of the sound of the band too. It’s like a cross between bubble gum rock n roll and a knife fight. “Psycho Kiss” is all harmony and punk threat, “Chinatown” is better still and “Mover” is appropriately full of energy. Their mission statement “Girls Got Balls” is passionately delivered and the suspicion is that they may be heavily stylised but there’s enough reality here to suggest that Heavy Tiger mean business. More Hanoi Rocks than The Runaways that’s for sure.

Let it be said right now that Backyard Babies know their audience. Five minutes before showtime the lights on their amps flash red and “Welcome To The Jungle” starts. Halfway through, it stops and on walks a roadie with a mic and asks a fairly standard gig question: “Wolverhampton what is up?” Thing is, he answers it himself. “I’ll tell you what is up! It’s The Backyard Babies!”

The four of them march on to “Th1rte3n Or Nothing”, the brilliant lead track on “Four By Four” and although you know it anyway, it’s only then it hits home. This isn’t a return with one original member, this isn’t a return where the hearts aren’t in it. This is the Backyard Babies with the same line up there had since 1989, playing like their lives depend on it.

It’s abundantly obvious that the bands most obvious rock star, Dregen on guitar, was born to do this, Nicke Borg has lost nothing and the Rhythm Section of Johan Blomqvist and Peder Carlsson are rock solid – this is despite the former spending most of the show drinking with the first couple of rows.

It’s appropriate that they play “Highlights” so soon in, because the rest of the night essentially amounts to one long highlight. “UFO Romeo”, “Brand New Hate” and “Dysfunctional Professional” come and go in a blur of glorious rock n roll and smoke bombs, and “Star War” isn’t far behind in the best song in the set running either.

They’ve not come all this way just to rehash the old stuff, either and there is a smattering of “Four By Four” material. “Bloody Tears” is an almost countryfied change of pace, and “Wasted Years” which is a punk boogie are the best of them.

After “Nomadic” ends the main body of work there was always going to be an encore, but even still the band having their name chanted by the crowd clearly means a lot. Their return is marked with a mid-paced “Abandon”, which comes alive here, before a brilliant “Minus Celsius” (not a comment on the temperature outside) and their breakthrough single “Look At You” finally bring the night to a close.

When a band makes a comeback after such a long time out, there’s always a touch of trepidation. It took about 30 seconds tonight for Backyard Babies to smash those fears to pieces. Although – obviously – it brought back memories, this wasn’t about nostalgia either. This was about a band reclaiming their former glories in the space of one night and in so doing turning in one of the best shows of 2015.