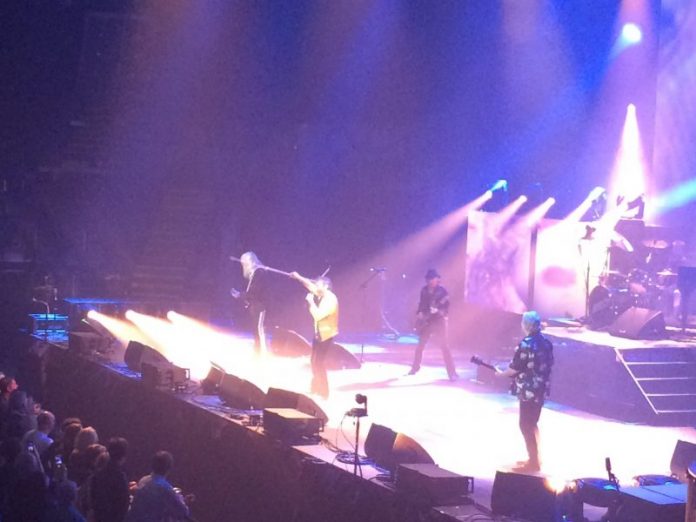 The surname gives it away (although the lady herself says it’s the eyebrows) but Jasmine Rogers is on the bill here due to family connections. She has more than blood in common with her old man though, given she possesses a rich, superb voice. More whimsical and folky than anything her dad did too, songs like “2 Years” are interesting, if a little out of kilter with the rest of the evening.

It is highly likely that without the work of Richie Sambora there would be no MVM. This reviewer and our very own Donnie grew up in the mid-1980s when Bon Jovi ruled not just the world, but our world. We made figures of the Jon and Richie in woodwork for goodness sake, and we knew – hell, we still know – anything on their first six albums back to front. And, just in case there should be any doubt whatsoever about the place Jovi hold in my heart, then check this: “Livin’ On A Prayer” was my mum’s favourite song, and when she died it was played at her funeral. All of which is a roundabout way of saying that writing what follows is very hard to do. Tonight, Richie Sambora and Orianthi are awful.

Beginning with “Let It Be” strikes a downbeat note that never leaves. The Bon Jovi covers (and let’s be fair that’s what they are) are essentially karaoke versions of classics. “Wanted (Dead Or Alive)” can’t decide whether its Southern Rock or a blues song, “Lay Your Hands On Me” is out of time and words are missing and “Livin’ On A Prayer” is knocked out better by bands in pubs called “By Jovi” or some such awful name. And scarily what is in between is worse. “When Love Comes To Town” takes BB King and makes it cloyingly sentimental (“I did what I did when she came to town” sings Sambora looking gooey eyed) and if you need me to explain why “I Got You Babe” sucked then have a look at YouTube. In their hour, there is just one Sambora original. The title track of his wonderful debut solo album, 1991’s “Stranger In This Town” and it just sounds messy.

Credit to Sambora for turning his life around, but this new venture needs a lot of work before his incredible talent shines once more.

It is perhaps only when you listen to Bad Company play their songs one after the other for an hour and a half, that you fully appreciate the scale of not just their own back catalogue, but also their influence on just about every single hard rock band that followed in their considerable wake.

Tonight is nothing more and nothing less than classic rock played superbly.

“Live For The Music” kicks things off and with three original members still in situ this is a tour that needed to happen. Mick Ralphs plays guitar as only he can, Simon Kirke keeps it ….urmmm… rock steady, and there is no voice better than Paul Rogers.

What is interesting, though, is the age of the audience. Often at these gigs younger people who weren’t around for the first time, it doesn’t appear to have happened with BC (MV – at 41 – is one of the youngest here), but the reverence that they are held in is evident.

The hits are all here, “Feel Like Makin’ Love”, “Burning Sky” and “Ready For Love” are as good now as ever they were, but there’s also a couple of dalliances with some lesser known material. “Crazy Circles” might not have been seen much back in the day, but it takes centre stage here, and the brand new song “Troubleshooter” sits well in this company.

Able to build to a fine conclusion, “Shooting Star” (ironic, perhaps, given the support, but my first exposure to this was as a Bon Jovi cover, and Sambora stands to the right of the stage watching here) “Can’t Get Enough” and “Rock n Roll Fantasy” are the envy of most, the set is topped off with two encores. Their eponymous song and “Rock Steady” prove that classic rock – forever written off as the magazines search for something cooler – will never die.

Bad Company do it better than most, as they showed here.