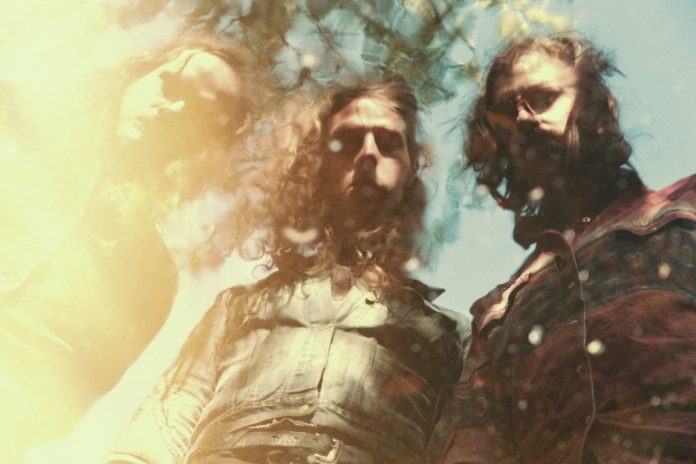 Not in the way they approach their unique brand of psychedelic hard rock. Not in the DIY way they recorded new album, Uncertainty is Bliss. And certainly not as composers and actors in the Max-Ophüls-Preis-nominated short-film Wald. While safe thinkers covet and cradle known tenets, BLACK SALVATION are blasting fantastic between unknown of inner and outer worlds of rockdom.

Formed in Leipzig in 2009 by Paul Schlesier, BLACK SALVATION’s early years pivoted on jamming gritty dirges, à la Electric Wizard, and elongated, repetition-based space-outs. Over the next few years, the Germans, with bassist Birger Schwidop and drummer Christian Seitz in tow, honed their craft and assisted in the foundation of Into Endless Chaos (IEC), a DIY organization of Leipzig-based counter-culture musicians and artists. Confident in their heavy wander and galvanized by their IEC interactions, BLACK SALVATION released their debut album, In Deep Circles, without label support in 2014. Praised equally for its riff-based rockers (‘Reveal the Night’ and ‘Black Spell’) and lava lamp runs (‘Silent Magic Spring’ and ‘The Devil sent us an Angel’), In Deep Circles illustrated BLACK SALVATION were crafty, adventurous songwriters with designs on rocking stranger things the hard way.

For new album Uncertainty is Bliss, Schlesier and Schwidop wrote together—drummer Seitz had already exited. Finding capable drummers was relatively easy, but getting the right fit, both musically and philosophically, proved to be a challenge. So, Schlesier and Schwidop kept BLACK SALVATION’s newest odes to the uncharted simple but imaginative. The result was a puzzle of drums, overdubbed bass, fuzzy yet nimble guitar, and Schlesier’s baritone vocals. The glint of genius in the early versions of ‘In a Casket’s Ride,’ ‘Leair,’ ‘A Direction is Futile,’ and ‘Floating Torpid’ was all too real, but BLACK SALVATION needed the right drummer—a skinsman with significant swing and a sizable attitude—to send them into the stratosphere. Enter Uno Bruniusson.

With Bruniusson behind the kit and the vibes at 11, BLACK SALVATION wasted little time—a week, basically—before entering an unnamed rehearsal room (not a studio proper) to track Uncertainty is Bliss. They had as long as they needed, but environmentally it wasn’t the best place to record a trans-genre, beyond-space masterpiece. For eight days, BLACK SALVATION fought the confines of the rehearsal room. But between high-end mics and a vintage, if temperamental 8-track Fostex tape machine, they emerged with a modern-day gem of psychedelic hard rock madness. The songs were eventually transferred to computer, where the finishing touches—overdubs and vocals—were constructed for mixing and mastering aces Martin “Konie” Ehrencrona (Tribulation, In Solitude) and Pieter Kloos (SunO))), The Devil’s Blood).

BLACK SALVATION’s Uncertainty is Bliss is to today what The Stooges eponymous debut was to 1969. It’s what Led Zeppelin IV was to Fast Times at Ridgemont High. And it’s how Can’s Tago Mago continues to blaze minds after nearly 50 years on wax. Songs like ‘Getting Slowly Lost,’ ‘Breathing Hands,’ ‘Grey River,’ and the short but filmic instrumental ‘The Eye That Breathes’—as well as the other four previously named songs—transcend today and yesterday. They’re tumultuous, pensive, rebellious, noisy, and perfectly imprecise hard rock tunes for otherworldly enjoyment.

So, the adage isn’t true. Bands do make hard rock like they used to. BLACK SALVATION’s Uncertainty is Bliss is psychedelic hard rock for all.