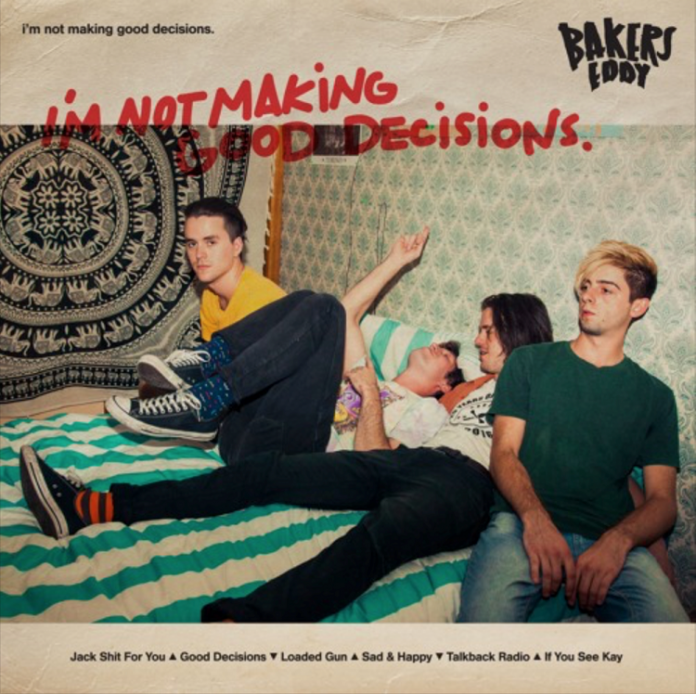 Taken from their EP ‘I’m Not Making Good Decisions’, the track is a coming of age tale and in the band’s own words, “is about spending all your money on partying so you can’t pay the bills. Making silly decisions!” Wrote when the group moved from New Zealand to Melbourne, “we were all living together for the first time, in a new country and probably having too much fun”, explains the band about the attitude-charged song.

Recorded with producer, drummer and songwriter Tom Larkin, founding members of #1 Kiwi rock band Shihad, ‘Good Decisions’ was originally composed on two chords, A and C, which is why the words “see” and “aye” are scattered throughout the first verse. The song was only intended to be a bit of fun, but ended up being one of the strongest tracks on the upcoming EP.

The video accompanying the single is a day in the life of the band, while living together in a house they suspect might have been a swingers’ pad in the past, “there is a fully working spa bath in the middle of our hallway, you can see Jamie sleeping in it in the video”, tells the band about the concept. While artist and video director Fagan Wilcox, which credits include Adidas and Kimbra, explained “the execution was always going to have the footage destroyed. The idea was to make it raw and low budget using effects, but rather than just pop a filter on it with a VHS effect, we used pixel bending and channel blending to add an intensity to the final edit.”

Bakers Eddy have been making a name for themselves in the New Zealand and Australian punk scene playing with Australian #1 hitters Gang Of Youths, award-winning The Rubens and Grammy-nominated USA hottest band Highly Suspect. Having established themselves as one of the most in-demand and exciting young punk-rock bands, the group are part of a new wave of acts who have been enlivening the local punk scene. With growing support across international key tastemakers including Amazing Radio and key Australian online outlets such as Pilerats and Tone Deaf, the band are set to make an impact when they hit British shores. Already having notched up memorable performances at Kiwi music’s biggest parties Homegrown, Rock The Park and Going Global Music Summit, they are now ready to take their ferocious attitude and lyrical honesty to play their debut Great Escape show on 18th May at The Black Lion, before heading to Germany.