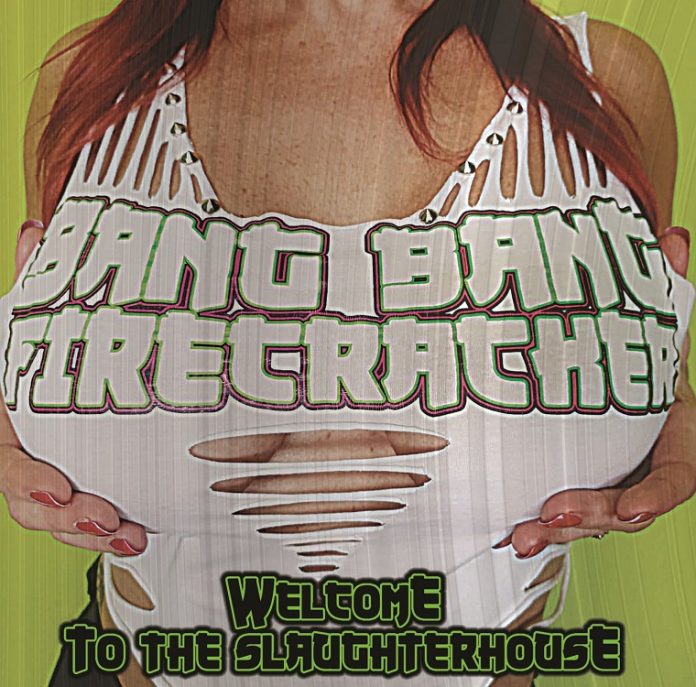 BANG BANG FIRECRACKER lay down a prominent marker with the release of their debut album, Welcome To The Slaughterhouse, out Friday 22nd February. BANG BANG FIRECRACKER will also drop a spanking new video this January. Prior to all of this, you can check out their current video for Hellbent For Pleasure, here.

Taking from a glut of influences, ranging from AC/DC and Ozzy Osbourne to Slayer and Guns N Roses, and drawing from the fundamentals of metal, classic and modern rock, BANG BANG FIRECRACKER have amassed a sound that packs pulsating rock riffs with enticing vocal lines. The end result is an onslaught of anthemic tracks that are brimming with groove, attitude and vigour.

BANG BANG FIRECRACKER is a brand new and exciting solo project conceived by guitarist Kieron “K” Berry. Kieron originally cut his teeth on the UK metal scene through touring and putting out a barrage of releases with Razorwire, Pain Control, Extreme O.D, and more recently Enemo-J. After leaving Enemo-J, Kieron took time out to recharge and regroup. After his brief hiatus from music, he answered a ‘Musician Wanted’ Facebook advert. Fast forward a few weeks, and Kieron soon found himself supporting one of his guitar heroes, Chris Holmes (W.A.S.P.). Kieron returned home with tour stories and the inspiration to start writing once again. Soon after, he recruited old friends Marcus Wrench and Russ Gwynne to respectively handle the bass and drum duties, and by the end of 2017, plans and songs were firmly in place and on track.

BANG BANG FIRECRACKER will drop their debut album this February. Kieron comments about the inspiration for the project and album: “Back in June 2017, I was outside the Yardbirds Venue in Grimsby while on tour with Chris Holmes (W.A.S.P. founder and guitarist). In one hand he was clutching his Vape and in the other he had a gallon jug of Pepsi Max! I grew up in awe of this guy and his fellow Hell Raisers. He was intense as hell and talking about all the new music he was creating…. I stood watching Chris every night for fifteen shows – we hung out at venues, walked around many cities and we shared many conversations about life and music. I started writing again very soon after – the songs flowed, and I’ll forever be in debt to Chris Holmes for essentially kicking my Ass!”