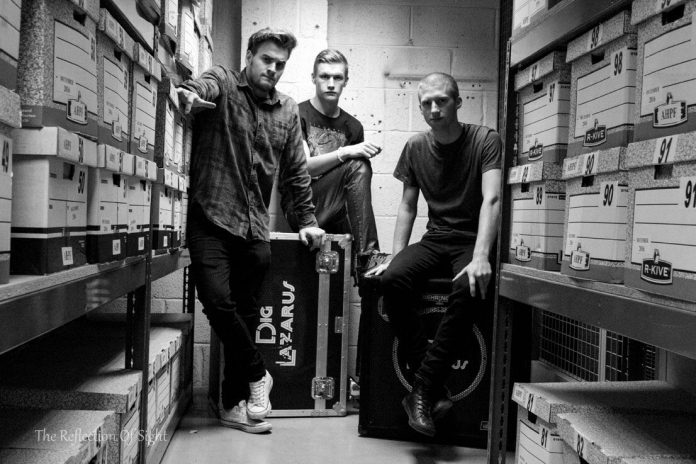 Leicestershire rock trio Dig Lazarus have just released their new single and animated lyric video for Tell Me Why.

On the video, frontman, Ash Tustain says: “I used to go to school with Josh (Rollins) and I knew I wanted him to make the video for us.  The initial inspiration for the video was Fear and Loathing in Las Vegas and we think Josh’s animated versions of us are spot on.    We even got a cameo role for my Uncle Kim in there too!   Josh is incredible and we’re really blown away by the feedback for the video and the radio plays of the single too”.
On the song, the band say: “Tell me why” is about someone losing their way; straying from the right path.   It’s about not really knowing where to turn, but having someone there to look out for you and  ask the questions you need to be asked”.
The track has been played on over 100 different radio stations over the UK and beyond, including Kerrang! Radio and the BBC.

Dig Lazarus won the original bands showcase in Leicester back in 2015, and have since gone from strength to strength, playing alongside established bands such as The Virginmarys and The Brew, as well as emerging names including The Bad Flowers, SKAM, and Tequila Mockingbyrd.

The band boast a gritty, hard-hitting sound with thundering bass, smooth vocals, and powerhouse drumming, bottled into a diverse range of original songs that will get your head banging and your toes tapping.

In 2017 the band released “Outlaw”, a critically-acclaimed four track EP alongside a music video for the title track “Outlaw”, and in 2018, began work on their first album.

Dig Lazarus pride themselves on an energetic and engaging live performance, with the tunes to match.