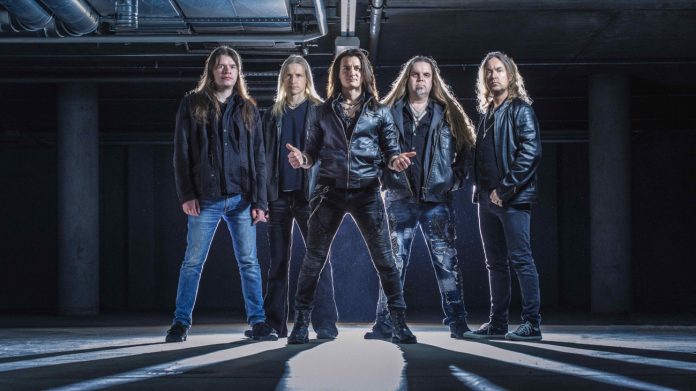 (Enfarce) and original singer Pasi Rantanen. The band released their debut album, ‘One For The Road’, in August 2016. It was well received with multiple great reviews worldwide, plus the band earned the no. 7 rank in the well-known Japanese magazine BURRN in the Brightest Hope category for that year.

The band toured their home territory in 2017, but Pasi Rantanen wound up having severe vocal cord problems and eventually could not sing at all. With a tour of Spain already booked, a high pressure search for a replacement singer resulted in the band finding the perfect candidate on….YouTube!

Italian-Argentinian Leonard F. Guillan accepted the job and, proving to be a great live performer, ended up joining the band as their permanent lead vocalist. “He gives 110% for the band and his enthusiasm is easily transmitted to everybody. Also, he’s a great showman. I had never before seen a guy who runs to the top of the bar and sings there for the audience!” says Mirka Rantanen. Leonard was stoked to join the band and the vocal recordings for the band’s new album were finally able to begin.

“I think the most relevant progression on this album is that this time pretty much all the songs were written after the first album came out,” continues Mirka. “On that record, you can hear a few very old songs, but the new material is really fresh and the new record will give the listener a much better picture of what kind of band we have become. Also, we have grown up a lot as a band, which means that we play better and are more relaxed together – and it of course affected the songs and feelings when we were recording the album.”

The new album, ‘Queen Of Hearts’, will be released on 10th August, following which King Company will tour to promote it, beginning in Finland, followed by a festival appearance in Spain and further shows in the works for the remainder of the year and well into 2019.