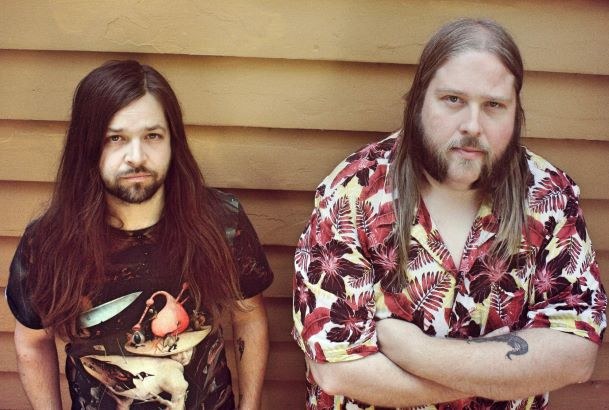 “I found my place in space and time, a dream unseen to be alive.” — Mysterium Tremendum

Captured at Los Angeles’ West Valley Recording Studios in August of 2018 with engineer Mike Plotnikoff (Fear Factory, In Flames) and mastered by Howie Weinberg (Slayer, Nirvana, Pantera, Red Hot Chili Peppers), Mysterium Tremendum is a monolithic, riff-heavy concept album boasting eleven heaving tracks examining the many facets of dying and what may or may not exist in the afterlife.

An emotionally satisfying record, lyrically and musically Mysterium Tremendum‘s exploration of death goes beyond the mere longing for it in order to see what lies beyond (‘Lacerated Psyche’ is about the death of Evans’ sister). There are many layers to it – you might even find parallels between the record’s concept and life itself. It’s a journey. And in their quest to pursue death, LORD DYING have themselves found new life.

“We set out to write a record about life, and it ended up being about death,” says LORD DYING guitarist/vocalist Erik Olson about the band’s third studio album Mysterium Tremendum.

LORD DYING’s Mysterium Tremendum will be released on CD, double LP, and digital formats. For pre-order options go to smarturl.it/LordDyingMT.

While the new record centres around death, it focuses more on what awaits us on the other side while also exploring our culture’s fear of dying, and the struggles with our own mortality. The ideas for the concept have been kicking around for some time, but it’s fitting that they’re only now coming to fruition.

At the core of these Portland, Oregon, heavy metal titans is Olson and guitarist Chris Evans, who’ve been making music together since fifth grade. They formed LORD DYING before they had a name or a record when another Portland powerhouse Red Fang beckoned them to open some shows for them in 2010. Two records and countless live performances – including tours with Voivod and Crowbar – followed.

Mysterium Tremendum is the record Olson and Evans have wanted to make since the band’s inception. It’s easily LORD DYING‘s most musically diverse album, but one that could only be made following the band’s jackhammer 2013 debut Summon The Faithless, and 2015’s brooding Poisoned Altars. “It’s more along the lines of what we wanted to do early on,” says Evans.

LORD DYING was already beginning to expand its musical palette – including moodier interludes and Olson‘s expanded vocal range – but Olson says once the decision was made to make a concept record, he and Evans pushed themselves to match the themes musically and vocally. You’ll hear it in songs like ‘The End Of Experience’ and the floating ‘Severed Forever,’ which sees Olson melodically doubling his vocals before returning to his trademark growl. Shorter interludes like ‘Tearing The Fabric Of Consciousness’ and ‘Even The Darkness Went Away’ are stunning and fragile, like nothing the band has ever done.

Olson and Evans worked tirelessly on the songs together over the course of a year-and-a-half, using programmed drum parts, and sending ideas back and forth. As Olson puts it, “It was the first time we were really able to put things under a microscope.” The songs were all but ready by the time they headed to Los Angeles’ West Valley Recording Studios in August of 2018 with engineer Mike Plotnikoff. L.A.-based bassist Matt Price and drummer Chase Manhattan jumped right in to bring these songs of death to life, and the results are huge and seamless.