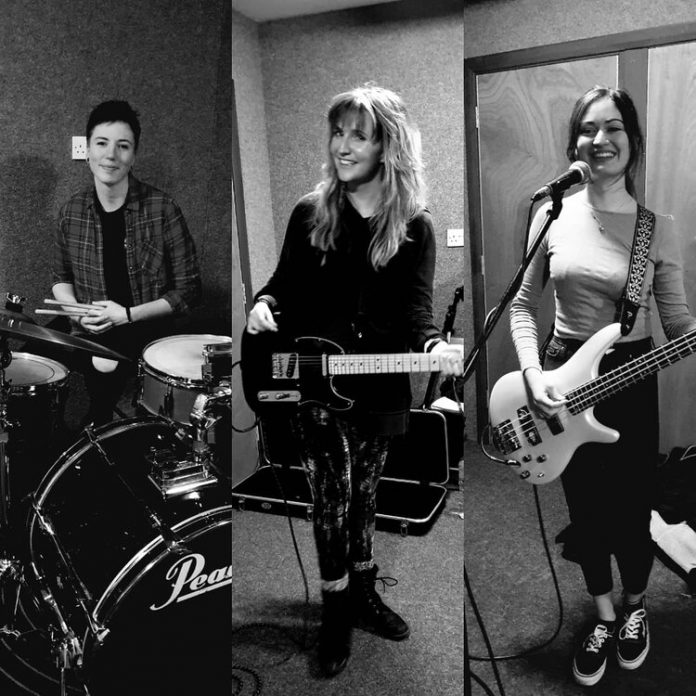 2020 will go down in history as a moment when the world was stopped in its tracks, took stock of its presence upon the planet and if sense prevailed rebooted many aspects. It will also be memorable for the emergence of a sound rich in emotion and fuelled by just as instinctive imagination; one bred and delivered with striking craft.

Hailing from English city, Derby, Muddibrooke was born when ‘Brooke’ Harriet McDonnell on lead vocals and guitar, bassist and backing vocalist Anna Melidone and drummer Mary Prince aligned their bold enterprise and musical passions. The band stepped forth January 2020, a fresh breath of adventure and intimacy but a proposal equally nurtured by the years of experiences embraced by its members, the playing of many prestigious festivals and alongside the likes of The Beautiful South, Luka Bloom, Dr and The Medics and much more among them.

The trio’s sound is a fusion of alternative rock and grunge but one just as hungry to subsume a host of varied flavours to its impassioned character. It is a striking and enthralling affair which is unveiled within the band’s debut single ‘Turn To Dust’. Released this May, the track openly bares its heart whilst being an echo for a moment so many can personally relate to.

Talking about their first single songwriter Brooke admitted, “I first wrote the song when I hopelessly fell for someone who didn’t feel the same. It highlighted the way that time was passing me by and there was nothing I could do about it. One of those typical love stories I suppose! I promise I’ll write a happy song at some point! Ha-ha”

Empowered by its melancholy and invigorated by its physical fire, ‘Turn to Dust’ epitomises the haunting beauty and emotional intensity of Muddibrooke’s music with Brooke’s elegant yet fervent tones wrapped in just as genuine melodic intimation and rhythms which cast a fine and skilled mix of authoritative trespass and motivation.

The threesome’s songs also relish an instinctive individuality, from each other and those of others, which will be in evidence over the next ten months as Muddibrooke plan to release two more singles on route to their first album and subsequently a European Tour which will start in the UK.

When honest passion and fertile imagination affiliates with prowess and daring, special moments are woven…