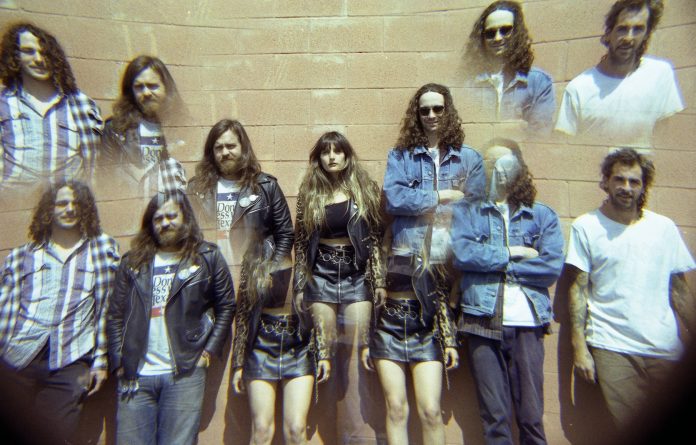 San Diego based five piece, PHARLEE have announced their eponymous debut album, due to be released this Spring, via Tee Pee Records. And whilst it may contain shards of West Coast sunshine there’s a definite darker, bluesy undercurrent to their inaugural offering.

Undulating throughout their infectious grooves and blues-influenced riffs, weaves a thread of psychedelia that is whipped into a veritable maelstrom when coupled with Macarena Rivera’s (Budrows) soulful vocals. PHARLEE features some familiar faces in the form of guitarist Figgy (Harsh Toke, Arctic), Dylan (Sacri Monti) on bass, and Zach (Joy, Volcano) who swaps his guitar for drums; they are joined by Garrett on keys to round out what is sure to become the signature PHARLEE sound.

Influences as diverse as ZZ Top, Tina Turner, Judas Priest, and Budgie – not to mention the fertile San Diego scene that birthed them – comfortably mingle but don’t overpower the distinctive sound of a new take on pure rock’n’roll. Successfully capturing lightning in a bottle, the PHARLEE vibe was committed to tape at Audio Design Studios in San Diego, by Jordan Andreen. Making good use of the analog equipment available only served to enhance the sound; liberal use of the B3 Hammond organ can be detected throughout the end result.

Having made their European debut at Roadburn Festival in 2018 as part of the extensive San Diego Takeover (which featured an overlapping sonic smorgasbord featuring the likes of Earthless, Joy, Harsh Toke, Sacri Monti and more), PHARLEE made quite the impression – an experience they now describe as ‘insanity’. Whilst the six tracks on the record make for one hell of a trip, PHARLEE is a beast best experienced live; ‘insanity’ doesn’t quite do justice to the intoxicating force of these five friends.

PHARLEE – Pharlee will be released via Tee Pee Records on April 5. Pre-orders are live NOW.