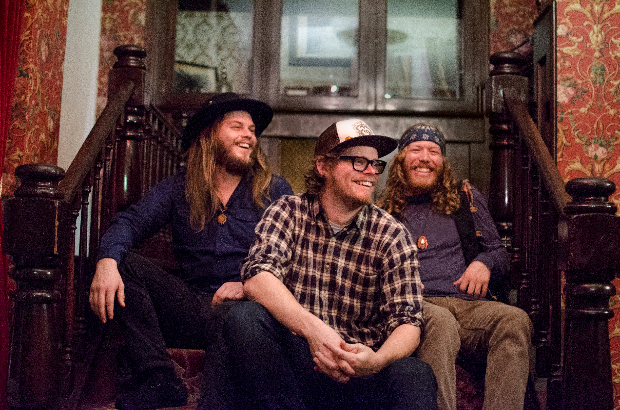 Blistering ahead on its mission to dominate and elevate the global heavy rock landscape, Ripple Music has signed blues-infused California heavy rock ‘n rollers SHOTGUN SAWYER to a worldwide deal.

Intent on reviving and re-imagining the musical spirit of Muddy Waters and Howlin’ Wolf while treading trails blazed by Zeppelin, ZZ Top, and Sabbath, bassist Brett “The Butcher” Sanders, guitarist/vocalist Dylan Jarman and drummer David Lee banded together in January of 2015. The result was a thundering and authentic blend of tasty grooves, crunchy riffs, searing solos and powerful vocals, all underpinned by virtuosic drumming.

After self-releasing impressive debut Thunderchief in 2016 and touring Europe earlier this year, Shotgun Sawyer is preparing for the release of sophomore record Bury the Hatchet via Ripple Music in early 2019, along with a Western US tour in the Spring.

For Bury the Hatchet, the band teamed up with Cody Tarbell (of Slow Season) at his Double Wide Studios to create an utterly raw, unfiltered record. The album was recorded live to tape with no instrumental dubs, and assembled with nothing but analog technologies and techniques to ensure the most honest presentation of the band possible.

Regarding their signing and plans for a big 2019, the band couldn’t be more enthusiastic about things:

“We’re thrilled to be signed to Ripple Music, the world’s finest dealers in heavy music! No one else boasts the elite roster that Ripple does, and we couldn’t be more excited to join the family!”

“So thrilled to bring these guys into the family. They’ve already played with many Ripple bands who all raved about them, and when I found myself unable to stop playing their debut in the car, I knew I had to reach out. Seeing them live sealed the deal. Just wait til they storm your town with their mutated heavy blues… minds will be blown!”

Look for Shotgun Sawyer’s Bury the Hatchet on deluxe vinyl, CD and digital from Ripple Music during the first half of 2019, and make sure to catch them tearing the roof off at a rock bar near you!