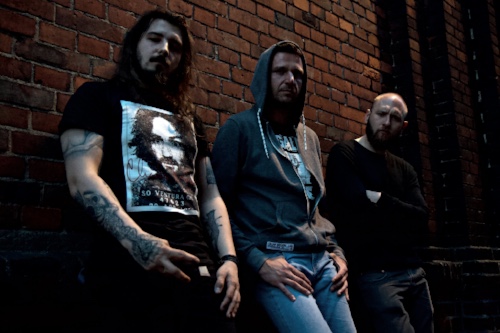 Formed in Wrocław, Poland in 2015 by guitarist Bartosz Janik and drummer Kamil Ziółkowski, Spaceslug was born a singularity; a rare and unusual discovery found deep amidst a cosmic multiverse of doom, stoner metal and progressive rock.

Completing their line-up shortly after that initial bang with the arrival of Jan Rutka on bass, the trio soon began their journey through space and time; writing, recording and releasing their debut album Lemanis in 2016 on BSFD Records/Oak Island Records to wide acclaim. ( ”If Black Sabbath’s ‘Planet Caravan’ had riffs, it would sound like this album,” The Shrieks From Below)

With the album enthusiastically received on terra firma, Spaceslug’s quite frankly supermassive sound served as a flawless introduction. A sound where moments of dark desolation sidled up neatly alongside light and hope, riffs and soar-away vocals, it opened a sonic gateway into the hard rock underground and pathed the way for their devastatingly brilliant follow-up, Time Travel Dilemma. Released just one year after their debut, the album kept the cosmic cannon firing on all cylinders and like their Mountains & Reminiscence EP (released later that same year) their ticket was deservedly stamped and valid beyond the stratosphere.

This July will see the official worldwide release of Eye the Tide, Spaceslug’s third full-length album and the closing entry in their personal trilogy: “It took us just four months to create our first album, Lemanis, and we wanted it to be more than just a project. We wanted it to be a journey into another dimension,” explains guitarist Bartosz Janik. “With Eye the Tide, we want this third part of the cosmic journey to explore the deepest and darkest parts of that universe. The album itself is more progressive and post-rock than anything we’ve done before as we always want to turn that next corner when it comes to making music.”

Eye the Tide by Spaceslug is released worldwide on 20th July via BSFD Records. Pre-orders will be available soon at https://spaceslug.bandcamp.com/music