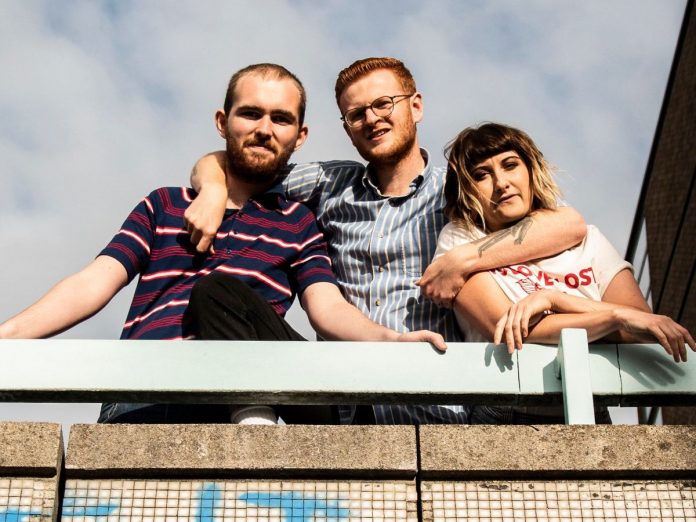 They have also announced their biggest hometown headline show to date in Liverpool at the Arts Club Loft on 29th March 2019.

Crafted and directed by drummer Bex Denton, and scripted by front man Peter Harrison, the video took the band two months to make entirely by hand, and follows the character of Timmy, a lost soul who goes to the depths of despair and back again on surrealist philosophical journey of self-discovery.

The band’s previous single ‘Blood Pump’ was added to the Alt. Rocked. Spotify playlist and ‘Slowly’ has so far made its way onto the New Music Friday, All New Indie, New Indie & Alt, and The Punk List playlists, receiving further support from The Line of Best Fit, Discovered Magazine, BBC Introducing, Amazing Radio and more.

Commenting on the video, Denton explains: “The idea for the video come from a serendipitous telepathic link up between me and Pete. I suggested the aesthetic I envisaged, and the script that Pete came up with for it fitted perfectly. It’s the first video idea we’ve ever actually agreed on—hence why this is our first one! It was filmed over 2 months in my living room, using a phone sellotaped to a cymbal stand and a shit load of black cardboard.”

Produced by Margo Broom at Hermitage Works Studios (Fat White Family, Goat Girl, Dead Pretties & more) the single is the latest taste of new material from the band since stand-alone single ‘Blood Pump’ released in 2018, following their 2017 EP, The House That Doubt Built.

The band announced their signing to Modern Sky Records (The Blinders, Calva Louise, SPINN, The Slow Readers Club etc) in late 2018 and are already booked to appear at Liverpool Sound City Festival in May this year, with further live dates TBA.

A band that started as a visceral emotional release on stage for the three-piece has become something infinitely more subtle and nuanced in the studio. From havoc-wreaking, no-holds-barred freak outs on stage, to a startlingly crafted batch of songs, SPQR are an intriguing and ever-changing creature. Ably front by Harrison, his gentle demeanour and thoughtful, intellectual nature off stage couldn’t be more at odds with the band’s jerking, lurching live spectacle.

With their first magazine cover already under their belts courtesy of hugely well-respected local music mag Bido Lito!, SPQR have been burrowing deep into the Merseyside music scene subconcious for the past year with a slew of sold out local gigs.

Wild-eyed appearances at the likes of WRONG Fest and the Strange Collective All-Dayer have seen their reputation for being one of the city’s most promising new live acts growing amongst the weirder denizens of the Liverpool freakscene with each tentative step, drawing early praise from the likes of The Line of Best Fit, The Quietus and CLASH.