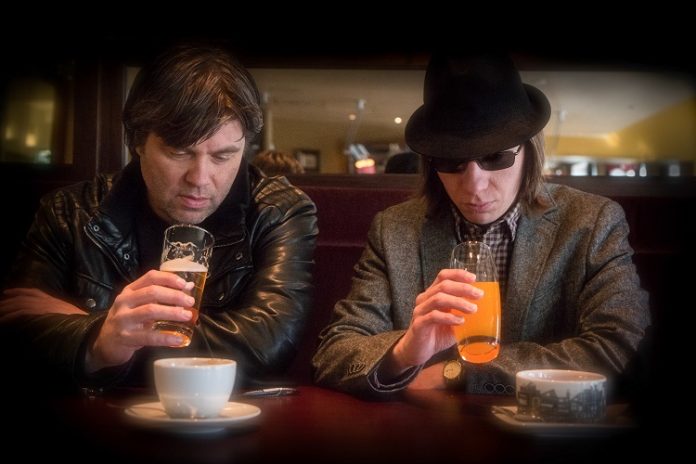 Having previously been signed to Sony/BMG with Carmen Gray, one of Finland’s biggest-ever rock bands, Tom Tikka has formed The Impersonators, a two-man project formed from their ashes designed to cut-out the politics and strife which come from the rock ‘n’ roll carnival of band life. Resolutely studio-based, The Impersonators channel the bejewelled power-pop of The Go-Betweens, the effortless song-writing genius of Matthew Sweet and the immediacy and worldliness of early R.E.M. to deliver timeless alt-pop melodies.

Comprising Tom Tikka and lyricist Antti Autio, The Impersonators are just that: a duo which masquerades as a full band and does everything it can to defy convention – whether that being their insistence on avoiding touring, or their songs, which avoid boy-meets-girl clichés and home in on the warts-and-all gnarliness of real life. To quote Tom himself:

Despite their poignant lyrics, the Impersonators are still a joyous and sweet proposition, with their vocal harmonies and chiming chords harking back to 60s pop majesties The Beatles and The Beach Boys. “Burning Blue” tells the tale of a man who has recently lost his wife, wandering the streets reminding himself of places they used to go together, whilst the Wurlitzer of life swirls around him. “Broken Snow” redresses the notion that all stories have a happy ending, offering a sobering but still reassuring view that silver linings can still be found in even the darkest cloud. It’s testament to the song-writing skills of The Impersonators, and of their secret weapon, producer Janne Saksa, that these painfully real lyrics are crafted into such spirited and immediately engaging pop songs.

Having grown up in the States to Finnish parents, Tom’s now based in Finland where his Californian melodies meet the Helsinki snow. Surrounded by his vast music collection and vintage guitars, his forthcoming single, “Sad Café“, is to be released on March 22nd and promises to be his hardest-hitting track yet.