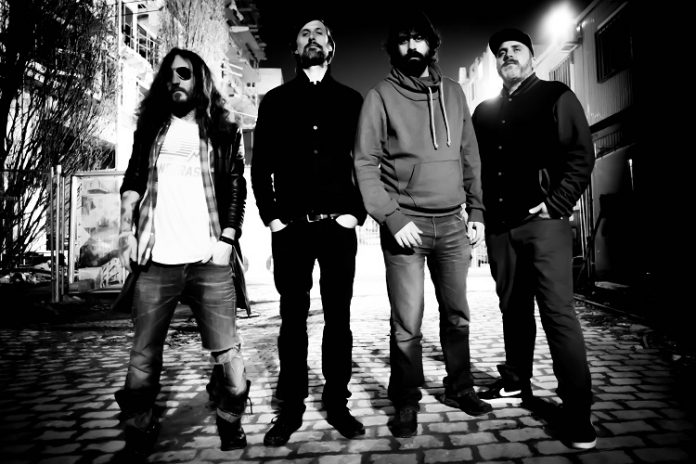 Blazing a trail strewn with melody and madness, The Progerians will showcase their brutal yet extraordinarily elegant onslaught of punk, sludge and doom rock on new album, Crush The Wise Men Who Refuse To Submit, this May on Mottow Soundz.

Formed at the beginning of 2011 in Brussels, the quartet have consistently prowled with purpose through the city’s musical underground, permeating minds and matter with the densest of riffs and the sharpest of lyrics, as the channel the anxieties and agonies of youth amid fears of unemployment, modernity and lack of future. As German site Zwaremetalen advises, “The Progerians: Ideal for your anarchist bulldozer parties.”

Formally known as ‘The Fabulous Progerians’ and ‘The Mighty Progerians’, the band’s first official release in 2012 was the 6-track EP, Degeneration (Hannibal’s Records). Over the years they worked to hone their sound into a unique sonic signature, one which was crystalized forever more on their 2015 debut album, The Fabulous Progerians. Widely known for their powerful live performances, following the critical success of their debut the band were invited to perform at legendary festivals across Europe, appearing on bills at Desert Fest and Roadburn.

Fast forward to 2019 and with the help of Mottow Soundz – another Belgian rock institution and home to heavyweights like My Diligence and cult rockers, La Muerte – The Progerians will serve their second and most ambitious record to date. Standing on the shoulder of sheer ambition, Crush The Wise Men Who Refuse To Submit, invites listeners on a hour-long journey, deep into the depths of spirit and substance in an attempt to sever all ties with inner demons. In no uncertain terms, it’s a devasting record and one you’d be crazy to miss.

Crush The Wise Men Who Refuse To Submit, the brand new album from The Progerians is released on 24th May 2019 on Mottow Soundz and can be pre-ordered here – https://www.mottowsoundz.com/music/progerians-vinyl