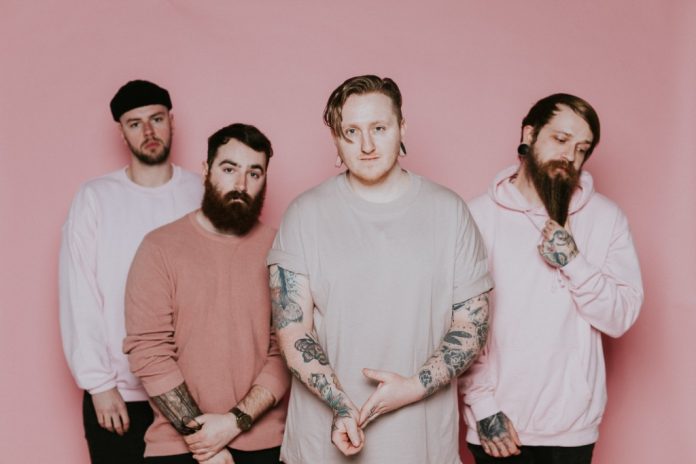 London, UK-based alternative rock newcomers THIS LIFE are pleased to reveal the video for their debut single ‘Hello Youth’ today. The track is out now on all good digital service providers.

Directed by Nick Suchak, the video for ‘Hello Youth’ is about finding that safe place in life, wherever it may be and whoever it might be with.

“Growing up, our families would always have a central mutual meeting point,” explain the band, “whether it be a grandparents house, an uncle an aunt, it was a place where we could all come together and be as one, talking about memories, aspirations and life in general. We shot this video in the middle of nowhere to show that this place can be found by all and doesn’t necessarily have to be a relatives house.

“Nick was great to work with, he was behind our ideas every step of the way and helped craft what we had scribbled down into the final product. He really captured what we had imagined: the couple reusing old furniture to build their version of their first home, and to build a safe place of their own for them to grow and develop their family.”

Drawing influence from a range of acts such as Taking Back Sunday, Thursday and Funeral For A Friend to name a few, ‘Hello Youth’ is indicative of the band’s propensity for combining the extremely personal and heartfelt messages contained within vocalist William Ellis’s lyrics with anthemic chorus lines, making for an often emotional and intense listen.

Commenting on the single, Ellis said: “This song was written about a relative who moved on. Her house was the central meeting place for a large family so when that house and home disappeared it became hard to keep everything pulled together.

“It’s about accepting that that’s okay, because we all have our own relationships that develop and change, grow and die. We are all these unique stems that have incredible networks built around us, so it’s important to cherish everyone who is a part of that in your life.”

The band hit the studio in 2018 to record a select few tracks with George Daly at The Ranch Production House (Creeper, Milk Teeth, Funeral For A Friend) in Southampton, and the single was mastered by Alan Douches at West West Side Music (Thrice, Smith Street Band, Fleetwood Mac).

Further music and live dates will be announced over the coming months.