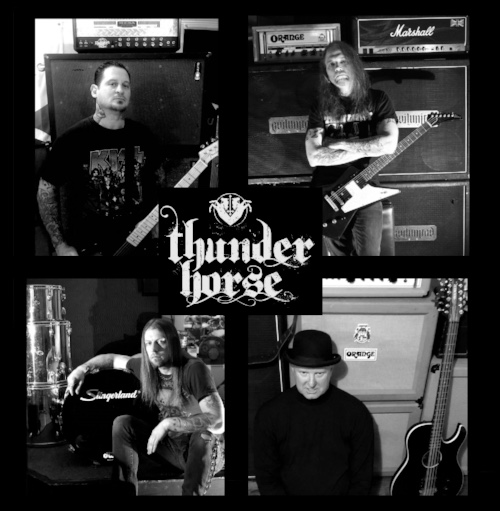 Originally formed in 2012 from a group of touring veterans and seasoned musicians, from the outset, all four members of Texan riff-bearers Thunder Horse have been defined by a friendship, chemistry and constant desire to break ground on something new.

Led by guitarist/vocalist Stephen Bishop, who served many years as a mainstay on the industrial metal scene in Texas as front man for Pitbull Daycare (Cleopatra records, MIA Records), Bishop was aided and abetted by fellow PD founder, confidant and lead guitarist, T.C. Connally. With each’s playing influenced in no small part by some of the most iconic hard rock and heavy metal bands of the late 60s and 70s – Roger Waters, Michael Schenker, Toni Iommi and Robin Trower – together, Thunder Horse’s song writing duties are divvied equally, in line with a passion for all things heavy.

On drums, the exceptionally versatile Jason “Shakes” West holds court and has most recently served as a writer and touring member of the Murderdolls (Slipknot’s Joey Jordison), Wednesday 13, Sebastian Bach, OzzFest Veteran’s Neurotica and Pitbull Daycare, alongside both Bishop and Connally. Leaving bass player Dave Crow, AKA “Uncle Dave”, to complete the charge as West’s backline counterpart; a legendary southwestern journeyman and accomplished 12-string bass player with an unrivalled rockabilly pedigree.

With an eclectic backdrop of influences and styles setting them apart from the pack, the San Antonio-based quartet’s self-titled debut is not only one that is borne out of a love for doom, heavy blues and classic rock ‘n’ roll, but it’s one that heralds an entirely new dawn in the southern sludge metal genre. Slow, low, and steeped in sounds synonymous with the majesty of 70s hard rock and heavy metal, the band is thrilled to announce that Thunder Horse, will see an official worldwide release on vinyl and CD via BC/TX Records on 14th December 2018.