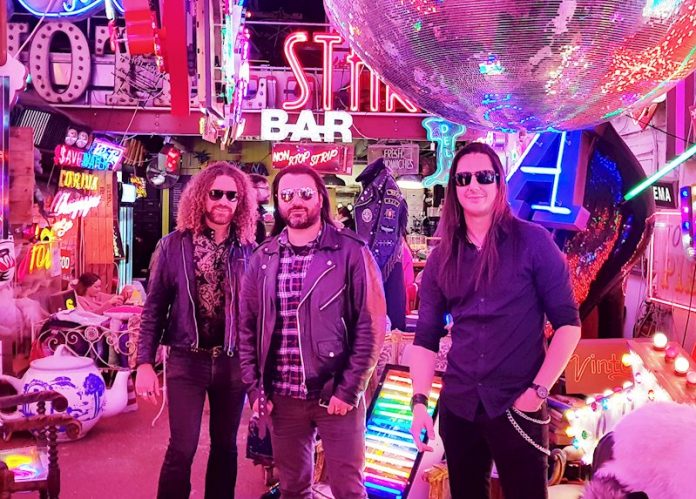 Hitting your senses and coming at you like the offspring of a whisky drenched Led Zeppelin and Hawkwind, TRIDENT WATERS’ infectious groove and contagious riffery are sure to ignite. The Londoners will release their new EP, Hollywood To Vegas, on Friday 7th June. Prior to this, the trio have just dropped a brand new video for the single, Eva Lane.

The London-based threesome were born in 2015 and feature the aural talents of Andrew Knightley (Vocals/Guitar), Wilson Zaidan (Bass), and Greg Zaka (Drums). Taking inspiration from Rival Sons, John Lee Hooker, Winery Dogs, Albert King, and Joe Bonamassa, the band despatch an engrossing alternative-rock sound that is underpinned by edgy blues rock.
TRIDENT WATERS are steadily picking up new fans and have already extensively played throughout the UK, sharing stages with genre legends such as Michael Schenker, Hawkwind, Shark Island and Procol Harum. In the over-saturated Rock world not many bands have the capability and musicianship to stand out from the crowd. TRIDENT WATERS achieve this very feat. Playing passionate, powerful hook laden tracks, they blaze a trail ahead of many of their contemporaries.

Having previously self-released two EPs, Tales Of Conflict and Devotion & Seven, the groundwork is now in place for TRIDENT WATERS to propel themselves to the vanguard of the UK rock scene. The band’s new EP, Hollywood To Vegas, is the trio’s most accomplished work to date and 2019 promises to be a monumental year for the band.