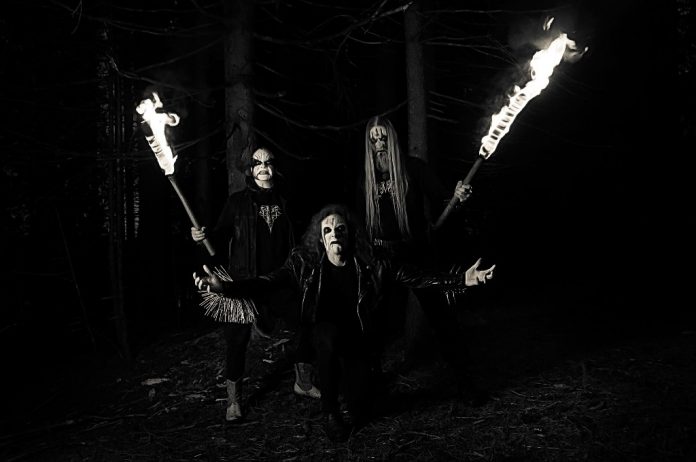 When TSJUDER hit the black metal underground with their first EP, ‘Throne of the Goat’ in the year 1997, the Norwegians quickly established a strong reputation within their scene. The EP’s ultimate rawness and demo character were balanced off with vitriolic fierceness and the spirit of “trueness” that adherents of this style seek for – rather than polished productions and glossy appearance.

TSJUDER are well aware of their proud heritage and once the trio decided to re-visit ‘Throne of the Goat’ it was clear from the outset that the black soul of the original could not simply be replaced. Therefore ‘Throne of the Goat (1997-2017)’ comes with both re-recorded versions and the original tracks as a solution for the musicians’ desire for their early work to be heard and preserving the roots.

To this day, TSJUDER stand for Norwegian black metal in its classic harsh and rattling form, yet free from any tedious nostalgia. The venomous throaty vocals of bassist Nag and guitarist Draugluin combine with a relentless blizzard of icy riffing and the pounding hail storm unleashed by drummer Anti-Christian to shape those majestic melodies and sonic structures characteristic for the dark Nordic style.

Founded in 1993 by Nag and guitarist Berserk with Draugluin joining soon after, TSJUDER left their mark with ‘Throne of the Goat’ and the ‘Atum Nocturnem’ EP (1999), which was originally conceived as a demo.

The Norwegians’ debut full-length ‘Kill for Satan’ (2000) brought an international breakthrough and with each following release the ranks of dedicated adherents as well as critical acclaim swelled higher. In the wake of albums ‘Demonic Possession’ (2002) and ‘Desert Northern Hell’ (2004), TSJUDER released their first live DVD, ‘Norwegian Apocalypse’ in the year 2006. For personal reasons the band decided to split, but after a hiatus returned stronger than ever with ‘Legion Helvete’ in 2011. With their songwriting obviously honed to hellish perfection during the break, TSJUDER pushed forward once again with their latest masterpiece, ‘Antiliv’ (2015), which the band modestly described as “raw and uncompromising black metal”. During the last years, the Norwegians have toured on both sides of the Atlantic and performed at all major metal festivals.