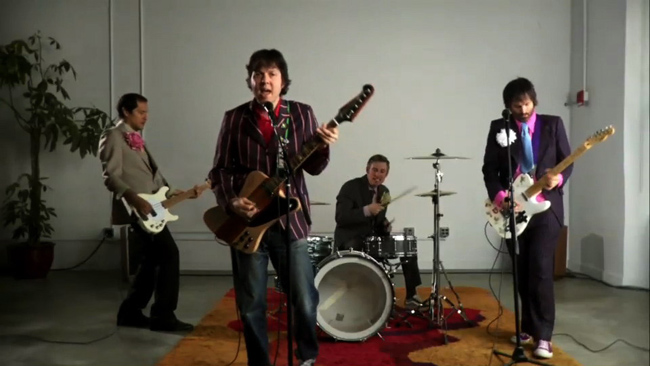 NYC power pop band VALLEY LODGE will release its new album, Fog Machine, on October 19 via Tee Pee Records. Featuring comedian Dave Hill as their front man, VALLEY LODGE are gearing up to release their follow up to the 2013 release Use Your Weapons. The first track to be released from the album is entitled Stand.

The group’s fourth album was recorded and mixed by Tom Beaujour (Guided By Voices, Nada Surf) at Nuthouse Recording in Hoboken, New Jersey. The band’s wildly popular song Go is the theme song to HBO’s late-night news satire program ‘Last Week Tonight with John Oliver’. VALLEY LODGE is known for infusing their hook-saturated songs with a sense of humor – no surprise given the involvement of renowned comedian Dave Hill.

Hill gives some insight into the band:
“Somehow VALLEY LODGE has managed to be a band for fourteen years now. It’s like we’re Molly Hatchet or something (speaking of fog machines). This whole time, Valley Lodge has always been about having fun and celebrating the guitar-driven, melodic rock we’ve always been into – bands like Cheap Trick, the Kinks, Big Star, Slade, the Replacements, T. Rex – and whatever else we can squeeze in there (whether it be something we stole from Michael Jackson or a right-hand tapping guitar solo after the producer begged us not to). A friend once told me we were like “an older Hanson.” I took it as a great compliment. Now if we could only get the hair right.”