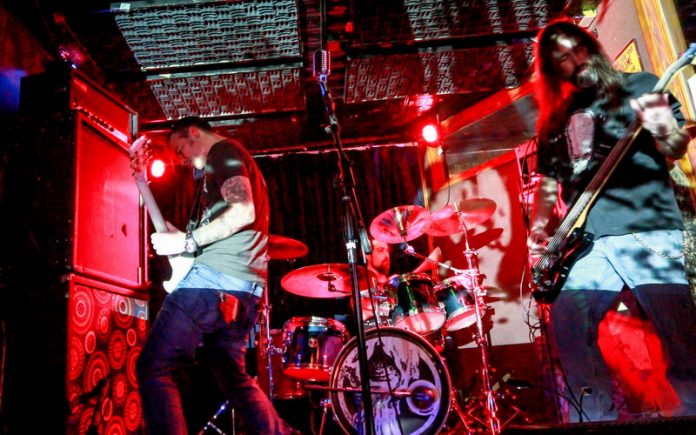 A vision of Doom…
When the Deadbolt Breaks… In a flash of lightning, the god ignites a smoke and takes a hollow inhale of Autumn wind from smoky leaf and ash. Its deep sigh exhales thunder across a pitch sky, rolling with a turn of head into the vast emptiness of a torn heart. A second strike of light cracks with a triggered hammer. It is done. The god no longer watches. Justice rips the assailant’s soul, just as breath from unobserved faith, yanking wretched petals from thorny stems to fall across the threshold of her face.

The soundtrack to the demise of righteousness and the retort of a broken heart. When the Deadbolt Breaks began in the mind of Aaron Lewis while still a member of stoner rock icons Cable. Originally designed to be an exclusively emotional outlet for personal sanity, Aaron brought in musicians and friends to assist and enhance the recordings. With no boundaries or specific styles to restrict it, a ferocious engine fed on bitter revenge was driven by their skill and passion.

Less than a year later, their debut album “In the Ruins, No Light Shall Shine” was completed in December 2005, and released by Spare Change Records in May 2006. A new line up was formed later that year, and Spare Change Records teamed with PsycheDOOMelic Records to release the band’s sophomore release, a split CD with NY sludge gods, Negative Reaction. When the Deadbolt Breaks toured through seven states in support of the two releases

In 2008, they began recording “The Last Day of Sun”, their third album contains 11 songs, spanning almost two hours and two discs of the heaviest, open, and sonically diverse music they had done to date. In 2010, When the Deadbolt Breaks decided to avoid any label angst and, in true DIY fashion, self-released the album as a free digital download. Handling all their own promotion, the release sparked off a wildfire of attention in the heavy music underground world.

Prior to a tour with doom giants Elder in 2012, the band took three days (and as many cases of wine) to write and record their second album “Drifting Toward the Edge of the Earth”. Finishing it after the tour, they released the double CD to critical acclaim in 2013, via EarOne Productions Records.

Now with a steady, heavy lineup of Randall Dumas on drums, Mike Parkyn on bass and Aaron on vocals and guitar, the band moved on to their next adventures. Under the writing and art direction of Aaron, they completed two epic music video productions in 2013 and 2015. Early 2016 found them recording their fifth record, an EP “Until it All Collides”, released on Salt of the Earth Records and supported by a subsequent tour. When The Deadbolt Break’s live show has become a monster of its own, with sheer volume and intensity transporting the viewer to another dimension.

In 2018, their sixth record, “Angels Are Weeping… God Has Abandoned…” finds its CD release through Sliptrick Records later this year. A vinyl format release is also in the planning stages.