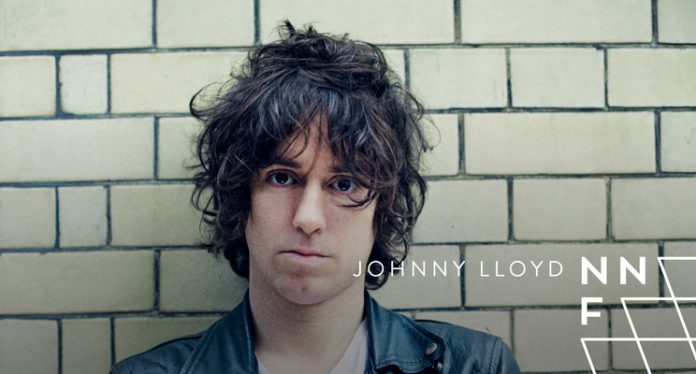 A new year always brings new beginnings, and for fans of JOHNNY LLOYD, the rumoured re-emergence of this treasured songwriter has been a long time coming.

Opening a confident new chapter in his career, the former Tribes frontman will return in 2019 to release a stately new solo album: ‘Next Episode Starts In 15 Seconds’ – out 3 May 2019, via Xtra Mile Recordings.

The announcement today is coupled with an exclusive first glimpse of the new material on the horizon, the title-track which also features backing vocals from longtime friend and label-mate Frank Turner.
Pared-back of sound and pure of lyric, the delicately spindled and chiming melodies of ‘Next Episode…’ find Johnny making a considerable leap forward into lush and dreamy pastures new. After a 2-year period in which Johnny found himself busily scoring music for various high-profile projects for the silver screen (including the celebrated Rolling Stones Film ‘The Quiet One’), ‘Next Episode…’ materialised somewhat out of the blue as the first music he had penned for himself in sometime, but would prove to be the first ripple in a wave of new material that would form his forthcoming solo album.
Very much indicative of his newfound direction and a bold departure from his indie-rock roots, ‘Next Episode…’ sees Johnny’s sound metamorphosing to find kindred spirits with the likes of Nick Drake or Sparklehorse, channeling that hushed, alternative-folk sound that is so eternally enchanting.
Speaking about writing ‘Next Episode…’, Johnny reveals:
“[Next Episode] was the first song I wrote for the album and it just landed out of nowhere. It marked a real turning point. It’s all about trying to enjoy the moment and not succumb to this modern idea of constant success. Everyone is different and that’s what makes life interesting, you don’t have to be anything or anybody you don’t want to be. It’s about trying to live in the moment.”
Turning the page on his days as frontman of chart-conquering Camden four-piece Tribes, Johnny has spent the years since their disbandment starting afresh, rebuilding, taking career risks and forging a new path of his own definition. On the long road to his debut solo album Johnny initially began forging close bonds with like-minds including Jamie T, Mike Crossey (The 1975, Hozier) and Hugo White (The Maccabees), all of whom would help him to release two solo EPs in close succession: 2016’s ‘Dreamland’ and 2017’s ‘Eden’. With the EPs warmly received and the reaction fervent at the 200+ live shows across the globe in support of the releases, public appetite was clearly ripe for Johnny’s debut album. However, with a surge in demand for Johnny to score a variety of film and TV projects (from the Rolling Stones’ ‘The Quiet One’ Film to 2019 feature film ‘Rare Beasts’ and more), it would not be for another two years until the songs would come into fruition. And yet, accruing songs all the while through this busy period, with a vision for his solo debut Johnny finally felt the time and music was right for it to finally materialise.
Checking into a 10ft square bunker in north London in late 2018 with producer Nathan Coen, the pair began to flesh out the bones of the record, operating with a hard-and-fast rule for each recorded track to be completed in “no more than three takes“. Though often a challenging process, the results as such were remarkable. With its rawest, purest and most endearing qualities perfectly preserved, the collection of tracks began to glisten like diamonds in the rough. Dusted with finishing touches from Frank Turner, Hugo White (The Maccabees) and Adam Prendergast of Harry Styles’s band, these esteemed guest appearances finessed the album with a touch of magic and drew the album into crystalline focus. Adding a last touch of class, the album was mastered at the infamous Abbey Road Studios byFrank Arkwright in late 2018.
Rich with personal renovations and revelations inspired by a whirlwind of changes in Johnny’s life over the past few years, the intimate and mature songs of the album tackle growth, getting sober and becoming a father, in a record that earnestly witnesses this songwriter enter back into the spotlight and truly come of age.
With the debut album set for release on 3rd May 2019, and tours in the pipeline for the UK, Europe and further afield, Johnny Lloyd is back with a renewed sense of direction and a steadfast attitude that is echoed throughout this assured new album.
Johnny headlines the Omeara in London on 15th February 2019 as part of War Child’s BRITSWeek events together with Frank Turner (DJ set), Brand New Friend and She Makes War for Xtra Mile 16th Anniversary. Also confirmed for Lost Evenings III in Boston in May, and 2000 Trees Festival in July.
FOR MORE INFORMATION
w/ https://www.xtramilerecordings.com
f/ https://www.facebook.com/johnnylloydmusic/