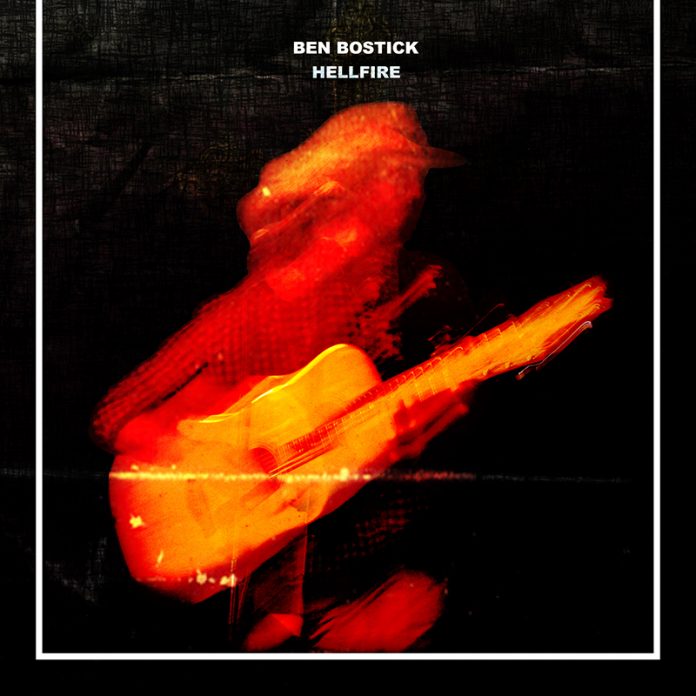 Sometimes, the 500 words or so I like to write on albums is rendered pointless by the artist themselves, who occasionally sum things up better than I ever could. Take Ben Bostick, for example. His second album was written in the bar – literally.

The Escondite in downtown LA, to be precise. The scene of his year-long residency after the release of his rapturously received debut record. And it was here that he came up with these 11 songs, saying: [they were] written to make the drunken denizens of the downtown dive go ‘hell yeah!’ In the tradition of the blues, they are lyrically dark songs that make you tap your toes and feel all right.”

Sorted. No more need for me, then.

Except there is, because “Hellfire” is so incredible that you just feel like should at least attempt to explain why.

Basically, it’s like this. The first song. “No Show Blues” reveals most of the secrets here. It also means that the first line on the record is “I got a job in the valley, but today I didn’t go.” It means that by the end of the second verse we’ve had the suggestion that: “the woman that I married wasn’t nearly so goddamn mean – and she didn’t suck down so many Benzodiazepines.” And just in case you thought there was a happy ending, there isn’t. “I got a job in the valley but I doubt I do anymore, ‘cos I took a day off and then I took four more” it offers as a final thought.

And that essentially is the album in a nutshell, tongue in cheek (you hope), funny, dark and all the while expertly played.

There’s 10 more where that came from too. The title track has a classic country strum, and jilts a bride in the first part, before attending a funeral in the end and rather fabulously containing the thought: “well, my drinking buddy passed away – lightweight, couldn’t hang….” and just for good measure possessing some of the finest honky-tonk piano you are going to hear, anywhere.

That is kind of the point, because while the lyrics here are right from the top drawer – not to mention from the top shelf – “Hellfire” is wonderful because its sounds so right. “No Good Fool” (“I ain’t no bad boy, I am a bad, bad man”) is topped off with some mighty organ, “Blow Off Some Steam” is as classic and timeless as anything that came out of Sun Studios in the 60s, and “Ain’t Cheap Being Poor” is a New Orleans second line made flesh.

In fact, they are pretty much all classic in their own right. “Tornado” – let’s be honest, any song that rhymes “Tornado” with “hotter than a baked potato” is always going to find a home on this site, even before it has the same carefree air as “Working On The Highway” by Springsteen. “Other Side Of Wrong” is one for those of us who can’t get anything right, “Work, Sleep, Repeat” helpfully distils the spirit of Waylon Jennings for all the good ol’ boys who hate their jobs.

Elsewhere there are a couple with just a hint of violence. “How Much Lower Can I Go?” makes no apologies anywhere, and “Feeling Mean” is a brooding thing sort of like when Elvis sung “Trouble” on the 68 Comeback Special and is all the reason you need to keep out of Bostick’s way (Ben, just in case,  I love the album, please don’t give me a black eye…..)

It all finishes with “The Outsider” which has the same filthy bass of The Stones and just as much rock n roll spirit. They might be outsiders, but you can ignore Ben Bostick and his brilliant band at your peril. In fact, so good is “Hellfire” that I might be forced to revise my opinion that the recent Kendell Marvel album is the best country record of the year so far. This is.