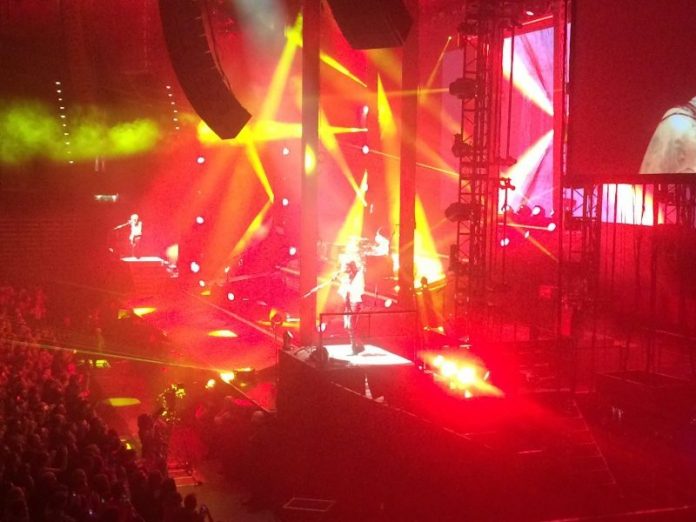 The story of how three men from Kilmarnock took on the world….. and won

There’s a moment, about two thirds of the way into this mammoth set by Biffy Clyro – clocking in 27 songs and at over two hours – where Simon Neil plays “Medicine” from the bands current album “Ellipsis” acoustic and solo. He stands on the back of the stage, behind the stage and surveys the scene as 10,000 or so people stare back at him. “Birmingham,” he says, in an awestruck way that suggests its anything but fake. “What an amazing view. I wish you could see it”.

To understand why he feel this way, you’d need to understand the tale of a three piece (although they are joined tonight by Mike Vennart who has performed live with them since 2012) from the West of Scotland have managed to sell 1.2 million albums and headline biggest festivals in the land – another one in Download is in the bag for next year too.

And actually, its as simple as this: They have great songs. Lots of them, and ones that have connected with people on a massive scale. That in a nutshell is arena rock. And Biffy play lots of it tonight.

Heavier than you might think too, “Living Is A Problem When Everything Dies” has a riff that is the envy of many a metal band, everything you could from a rock band is right here.

There’s catchy ones like “Black Chandelier”, there’s early ones like “Justboy” – when the band were essentially a Brit Math Rock band – and there’s a huge production with a enormous stage set and incredible light show.

And crucially, there’s some enormous, massive songs. “Many Of Horror” is an anthem here, with fists in the air yelling “if you’re gonna hit me, hit me hard” and the shared experience that this type of show needs is right here.

But the skill in all of this is how they follow it up. The band leave Neil stage front – literally as he’s stood on a little one in front of the giant one he’s been on all night with the Johnston Brothers – to sing “Machines” as if he’s in your living room.

The encore sees “The Captain” and its enormous chorus sale into view,  and it ends with “Stingin’ Belle” and as many crowdsurfers as you can count.

That, though is the point. Arena rock is supposed to be polished and huge. Biffy Clyro are both those things, but they still remain the same rock band they were 14 years ago when “Blackened Sky” came out and we all thought “well, this is different.” Biffy were the outsiders then – they are still, it’s just  now they are subverting the mainstream too.