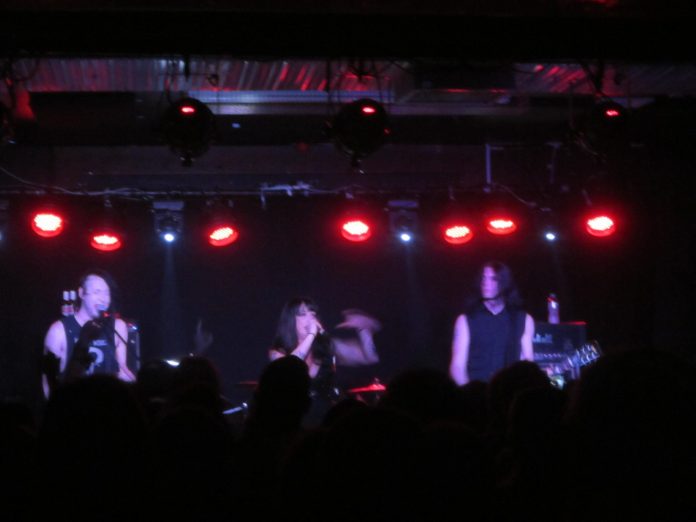 Damian gets his goth on

Formed in 1999 in London, Ontario, Canada, The Birthday Massacre are a band that have been described as incorporating several genres such as new wave revival, electronic rock and gothic rock dark. They also veer to hard rock and nu metal.

They hit the UK on their ‘Under Your Spell Tour’ which is also the name of their seventh album, released earlier this year and follow up to 2011 release `Imaginary Monsters`.

The lights dim, and the troupe hit the stage to a near as damn it sold out audience and storm straight into “Counterpane” from the new release. A quite powerful and blistering tune to kick off with. The melodic” Red Stars” follows before “Kill The Lights” which comes across as a really heavy song live. We are gifted two songs from the latest release with the wonderfully ethereal “One” and the equally beguiling “All Of Nothing.” The set takes a slight change in direction with the darker and industrial tinged “Destroyer” before sharing the slower mellifluous “Superstition.”

The audience are encouraged to sing along with the anthemic “Lovers End” before another oldie, the beguiling “Video Kid” sends the faithful into a frenzy. We get a couple of songs off the new release with title track “Under Your Spell” and “Games” which sounded like a Sisters of Mercy offering live. The anguishing “Leaving Tonight” and brooding “Pins And Needles” would have brought the set to an end but rather than leave the stage, the band get the audience to cheer as they remained there and performed a final three songs.

So, the sort of encore consisted of the heavier rock out of “In The Dark”, the melodic “Endless” and the haunting, slightly unnerving but mesmerising “Blue.”

This was the last night of the UK tour and the band, especially Chibi seemed genuinely upset that their journey had come to an end. This was a very enjoyable show and I’m sure, on the strength of presentations like this, this troupe will be playing larger venues on their next trip here.